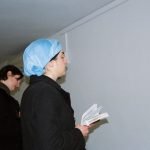 I was in shul in Berkeley once and there was a yeshivish visitor who got very unnerved that a woman was saying kaddish, the Rabbi coolly quieted him down and that’s when I learned that women generally don’t say kaddish. I also learned that when women say kaddish it pisses off some folks. God only knows why someone would be pissed off at someone who was comforted in their mourning by saying kaddish, regardless of their sex, but since it’s not “counted” why do it, right? I felt like I should reprint the thought provoking and very sad comment (on Sunday’s post about being jerks while someone else is saying kaddish) from a woman who has experienced some very hateful reactions to her mourning for her mother. To say shut up to someone saying kaddish is disgusting.

Amen. But you know what’s even worse than tallis-folding while you’re saying kaddish?

People yelling at you to shut up.

Or people who helpfully inform you after shul that you should know that it “doesn’t count” that you said kaddish. And is there maybe someone who’s “really” saying it for your dearly departed? And if not, do you want to pay them to do it? Because a random guy at shul who’s never met anyone in your family is clearly more qualified to mourn your loved one than you are.

I understand of course that different communities have different customs and halachic perspectives on women saying kaddish, though there are strong Orthodox opinions in favor of allowing it. But surely, even if you genuinely hold that only men may say kaddish, there *must* be a more sensitive and compassionate way to interact with a female mourner than yelling, insulting, or locking her out of the women’s section at shul.

Will a woman saying kaddish lead to mixed dancing, zera livatala, or bittul z’man? I wonder if anyone can come up with a good reason that these people should respond to this woman as such. Even in my uber BT shul in San Jose with a very yeshivish Rabbi, there are plenty of women who say kaddish. Sure, he may hold otherwise, but sometimes people just need to keep their opinions to themselves. I guess we can go with the popular saying that looking frum is more important than being frum.

← Rabbi Michael Broyde: Not the first to use fake online identity
Halachic Debate: Is there kosher sefira music? →

267 comments for “RE: I hope you aren’t jerks when I have to say kaddish”