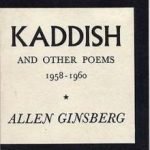 Fortunately, I’ve never had to say Kaddish for anyone. I hope, when that day comes, that the rest of the congregants aren’t jerks about it. You know, like they are now.

This happens during the week, but especially on Shabbos: someone saying Kaddish is a sign to start folding up your tallis. I guess people fold their tallis while people are saying Kaddish because it would be rude to start balancing your checkbook.

But I can understand it, it is Shabbos after all. If I start folding my tallis while someone is saying Kaddish I can save TWENTY-FIVE SECONDS off my getaway time. And I need that time because, after all, it’s Shabbos and I’m in a hurry to get to — NOWHERE. IT’S FUCKING SHABBOS.

It’s not REALLY disrespectful. I mean some of the people saying it have lost someone very close to them almost A WHOLE YEAR ago. Why would they be disturbed by the sudden flurry of tallis-folding?

I have an idea. The next time you’re inclined to fold up your tallis while someone says Kaddish, why don’t you instead, just pull out a picture of the deceased person and take a GIANT SHIT ON IT?