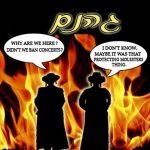 The funny thing about lists like this is that we all sit around laughing at our own stupid ideas and then one day, some guy, like the infamous bag-man shows up and some of these items become a reality. Actually, it’s not so funny when you think about any of the extreme views that fundamentalists in every religion try to enact into law, as if there was some tradition in the alter-heim that involved separating little girls and boys at the playground, duh, the boys knew all of shas by the time they were 7 and had no time for playgrounds. However, in the last few years, some people have become so frum that we can make lists like these and imagine some of these things actually being done. I posted the “I’m so frum I…” on Facebook the other day and I got many good responses.

Check my pot for bugs

Have a separate room from my wife

My toilet paper always has a badatz hechsher

Won’t eat in my own house

I don’t trust any hashgacha

Have tzitzis on my towels

Call it megilas mordechai because Esther was a zona

Talk about how frum I am without putting anyone else down

Get a goy to wrap my tefillin on shabbos

The women always eat in the kitchen when we have guests

When people talk in shul, I yell shah at the top of my lungs making sure to give the talkers proper mussar

All my vegetables get soaked in bleach

Never eat vegetables, the price is not worth it

Hold that dor-yeshurim is assur because it holds of science

Wear a giant garbage bag when I fly

Never eat in the sukkah

Never wear skirts with a fly because of beged ish

Never joined the high mile club because of yichud

Would never ride the subway unless it was separate

Make sure to never make any z’manim except candle lighting

Have a suitcase ready to go in case moshiach comes

Never tell my husband when mikvah night is, so I don’t give him hirhurim

My bulletproof stockings are actually made of Kevlar

Hide all of my books about women