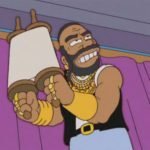 The Tyranny of Hagbah

No bully has ever kicked sand in my face. And though I was never a 97-pound weakling I am now a slightly doughy, 200ish pound weakling. I only have two fears: spiders and getting called for hagbah. No one wants to be the guy who drops the torah and make everyone in the congregation fast for 40 days (I don’t think that’s exactly true but that’s what they always told us).

I have successfully done hagbah before. Still, it was always a thing. I tried not to grunt. Tried not to let me face show that it was an effort. Don’t let on how close I am to pitching the torah into the drink.

I have good hagbah technique: roll out a little scroll until it’s taut, slide the Torah off the podium and thrust in the air in one motion. Looking to get at least three and a half columns.

One day the worst, or almost worst, actually happened. I had hid out in my shul long enough until it was finally my turn for hagbah. I decided to go for nonchalant. I casually grabbed the handles, spilled out 3 1/2 columns (the minimum amount to prove manhood) and lifted into the air and… and… my arms betrayed me. One end started to fall. “Guys…” I called out. No one seemed to notice that one end was headed south.. “Guys!” Then two guys run over to rescue me. To complete the humiliation, one of the guys, in front of everyone, squeezed my bicep and pronounced it underinflated. Is this the moment that made a man out of Mack? Naaah. I’m reminded that I have worked in front of a computer for the last seven years and have all kinds of repetitive stress nerve damage in both my hands and arms. Yeah, that’s it.

So now I’m in a new shul. I’ve been a part of this minyan for over a year and have somehow managed to avoid hagbah. I was once asked, but begged off because of a broken rib, which was true. However, I fear my luck is soon running out. Multiple day chagim, with two torahs, readily to eat up lifters. 7th Day Pesach I was sure that I would finally be called on so I left. For a few minutes. Just long enough.

As of this writing, I still haven’t been called on. And I’m still living in terror. I always believed that there were two kinds of men in this world – Hag-bites and Gali-lites. Hagbites parade around, get girls, eat rocks. Galillites talk softly and occasionally splash lavender water on their vaginas. I may be exaggerating but only a little. I’m not avoiding, I’m just postponing until I can get back into shape. What do I have to do – push-ups? Arm curls? Am I really the only one living in hagbah terror?

132 comments for “The Tyranny of Hagbah”