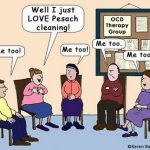 For the first time in my life I wasn’t craving chometz the entire pesach, this was also the first pesach that I “made”. Usually I go away for pesach and for the last couple of pesach’s I lived in places without much a kitchen. The office building I lived in was too far from any community to actually stay for a yuntiff and last year I ended up in Oregon for most of the holiday. This year I had something they call a wife and we decided to take the pesach plunge together. She cleaned and I cooked, see, we have that whole liberal equality thing worked out just fine. Fact is, she won’t let me clean because I suck at it.

If you hang out on Facebook for the week before pesach, you start to get nervous about food costs and where on earth you’re going to find organic, shade grown, fair trade, imitation mustard that happens not to be kitnyos. You also start to take stock of all the things in your kitchen that could kashered. Thank God someone was gracious enough to get me a Global Chefs knife for my wedding, because all you really need is one knife. It was also a chance to buy some new cookware I’d been eying. Off to TJ Maxx Home Goods I went and searched around for some good egg pans, stainless steel saute pans and other random goodies. Someone else was nice enough to get us a late wedding gift in the form of a food processor and that was used for many parsnip-celery root kugels and latkes.

The expensive part of pesach is not really the food, it’s the start up investment in pans, new sugars and oils that breaks the bank. For instance, it’s painful to buy new sugar when you have a 25 pound bag of it sitting around, same thing with spices. I bought one small thing of black pepper, that’s all I could stand because I had a pantry full of good spices and hate to buy some old ass Leibers crap.

As for actual kosher for pesach stuff I bought, it was about 10 items, a few cans of tuna, bottle of grapeseed oil, sardines, black pepper, mayo, apple cider vinegar and matzo meal. Everything else was either things you didn’t need a hechsher on like salt, sugar, olive oil or fruits and vegetables. I just used whatever meat I had in my chest freezer, which amounted to a lot of brisket and lamb breast.I also went around to the neighbors and picked a ton of grapefruits, oranges, lemons, rosemary, lavender and thyme. I stripped my garden bare of it’s scallions, mint, lettuce, chard, oregano and chives – and I was ready to go.

My basic goal was to serve some sort of fruit/ pickled fruit for desert instead of some intricate almond meal potato starch cake at every meal I made. I also wanted to have some sort of radish/apple slaw situation and of course no pesach meal could be complete without guacamole. I am fairly certian that it’s a minhag yisroel to have gauc at all pesach meals. I also made a bunch of balsamic onion jam, strawberry basil jam and orange marmalade to accompany any matzo and cheese sandwiches that needed to be made for breakfast.

I purposely made a lot of food that could go with either milchigs or fleishigs, for instance I decided at last minute after missing shul on the first day to do a small milchigs lunch. I hosted all of the lunches, but I still planned on having enough awesome food so we shouldn’t go hungry.

Pretty much every pesach until now, has been marred by chometz cravings. I can remember sitting around, starving and wondering when the madness was going to be over. Yes, I forced myself to uphold the motzei yuntiff pizza minhag and managed to bust out some fresh pizza at midnight after yuntiff. I also managed to drink a beer, because by now it may as well be halacha to drink beer after pesach. I still haven’t managed to remove any of the foil in my kitchen, I used mostly contact paper and it looks better than our 1960’s counters so I left it on. I also noticed that the foil strengthens our wireless signal so that stayed in as well.

← It’s now untznius to mention a kallah’s name
Have you ever paid for sex? →