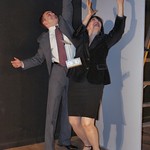 The president of my shul called me this evening, furious that I did not participate in the shul’s mishloach manot program. “Reb Telz” he says “Why are you not on the list?  We are packing the bags, reviewing the mailed-in sheets, you are not participating! What’s wrong?”

Our shul mails out a 3-page checklist of all the shul members to everyone in the shul. We then check off the people we want to give mishloach manot to. It costs a few bucks per person. The shul makes and delivers bags of crappy shaloch monos — usually cheap items from Trader Joe’s and some pesachdik item from Wegmans, packed in St. Patrick Day bags from the Christmas Tree Shop, and filled with pastel colored Easter grass. Oh how Jewish. Since popular people get many givers, the shul pockets the extra money and makes a good take from the whole deal.  Of course there’s the “reciprocity” box which means you’ll automatically give someone if they checked you on their list. So you get the extra surprise after purim when you find out that you were way more popular than you thought — and it costs you.

Here’s what I told the President:

These faux-manot neither fulfill the letter of the law, nor the spirit. They are not halachically considered mishloach manot since they are not gifts I give to my neighbor. Thus shul is not my shaliach. They are just assuming the appearance of this act, it’s like a show, a play.  The whole idea behind mishloach manot was to build a sense of community. It’s not that you need my kugel and I need your tzimmis. It’s that we need to be the kind of community that can share food with each other. But we are not.

We don’t share food. Half the people don’t eat out at other people’s houses after the fiasco last year with the so-called “trief lemonade” brand that has a triangle-K hechsher; that our Rabbi does not “recommend.”  It’s lemonade!!!! how can you treif that? it had a hechsher from an orthodox rabbi!  It’s a squeezed lemon with sugar and water! But no, someone put the lemonade in a mishloach manot he gave out and everyone went nuts about it since it did not have the approved hechsher on it. Now no one eats at that person’s house anymore because of his shalach monos.  And no one eats at people who talk to him for fear they think treif lemonade is OK to drink. This is the opposite of what’s supposed to happen.

The spirit of the miztvah is that we share our food, but the reality is that your faux-manot program just redistributes groceries.  You go to the store and bag some Paskesz candy, an orange, and a grape juice bottle. How’s that building a community? All you are doing is simulating a mitzvah and making money doing it.  This is all about the money. You want a donation, just ask the members for a donation. But I’m not falling for the shul’s cheap money-making scheme.  I checked it out on snopes and it’s a hoax. We still have to give real shalach monos anyways to fulfill the mitzvah.  Oh, and your orange doesn’t have a hechsher on it, by the way.

His response:  “Telz, you can forget about getting an aliyah until Simchas Torah.” As if that’s something I didn’t already expect.

So you might get shalach monos from me, or you might not. Deal with it. It’s purim and I freaking love my community. I’ll spare you the Easter grass and Rakusen crackers, and I’ll mail in a donation to the shul since they have to put up with my crap.

Search for Monetizing Mitzvos on 4Torah.com

← In What Athletic Achievement Was Yeshiva University Leading the Country?
Best purim video →