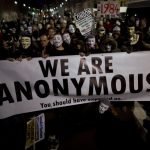 I just glanced at a few blogs the other day and noticed that Cross Currents’ Yaakov Menkin has started a chain of blog posts about anonymity it’s pluses and negatives. All the bigger Jewish bloggers have weighed in so I figure why not? Before moving to Silicon Valley, I was under the impression that one could maintain anonymity on the internet, I now know that this is not true. Comments, screen names, passwords and anything else you enter into the cloud can be traced back to you. Yaakov Menkin is writing specifically about about anonymous commenters who criticize without caring about accountability or humility and he is right, but there isn’t much you can do about it.

When I decided many moons ago to start writing under my real name, I only did so because I figured if I was to be taken seriously as a writer and a comedian I couldn’t be anonymous forever. I also felt that if I was writing under my real name, I wouldn’t go over the edge. Unfortunately, in the frum community, one cannot always express their opinions and some folks need to take it off the record. Dov Bear is a great example, he expresses unpopular opinions, many left leaning in a community that is run by folks who are quite right wing.

While I don’t necessarily discount what Mr./Rabbi Bear has to say, I do tend to take most anonymous blogs with a grain of salt. For instance, when the fellow who claimed to be a Rabbi who was also an Atheist started blogging, I felt that it was probably fake – still – it was a very good blog and it opened up some good discussion on faith and jobs that require faith in God and so on. If anonymous blogging was something that didn’t do its job, folks from the frum world wouldn’t be constantly attacking them. Imagine if all those off the derech, shidduch, and critical of Jewish leader blogs were not anonymous…would that make them any less or more effective?

I’m getting ahead of myself, the post on Cross Currents that started this whole megillah was referring to negative commenters that hide behind anonymity to criticize without taking responsibility for their words or actions. I know all too well about these commenters, Frum Satire, for better or worse is filled with anonymous commenters who sometimes say very mean things about me. I’ve always been one for free speech, I absolutely hate when frum sites edit, delete or rewrite comments to fit their agenda. I rarely delete comments and they are automatically sent to moderation only when certian spammy keywords are in the text, but when someone curses your marriage and your wife, sometimes it can get to you.

Part of the joy of blogging is the discussion that ensues after the post, there is a good percentage of folks who read the title and skip straight to the comments – you can always pick out those people. Unfortunately, I have witnessed first hand, the reduced attention spans of folks through the years, but that doesn’t mean we have to ban anonymous comments. So many anonymous comments are good comments, just because someone fills out your email and name form, doesn’t mean it’s their real name. With the reduced attention span, the more you ask of your commenters, the less likely they are to comment and this would lead to reduced readership.

Like it or not, anonymous commenting is something you cannot get rid of, unless you have millions of readers and I doubt Cross Currents or any other Jewish blog could afford such drastic measures. The anti-anonymity push from the frum world just seems like a great way to cover up its misdeeds while pretending that those who expose their misdeeds are creating a chillul hashem or speaking loshon horah. Just because someone spoke loshon horah about you, doesn’t discount the things you have to look at in the face of this ever growing transparency in the frum community.

Check out the post on The Jewish Press site

← Martin Luther King and the Jews
Minhagim Busters discovers that you do gain weight on shabbos! →

15 comments for “Is anonymous blogging a bad thing?”