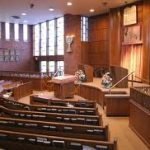 There’s really so much to hate about davening in Modern Orthodox shuls, once you get past the joys of the super low mechitza and interesting reading materials in the library, the sad truths hit you all at once. The low mechitza doesn’t allow for open ball scratching and it doesn’t make checking out the ladies interesting. It also makes for those annoying couples that need to constantly be passing their children over the mechitza in the middle of laining. The interesting reading materials in the barely used library become a bore after a couple 3 hour shabbos morning services. Don’t even get me started on the extended anim zemiros service brought to you by children who obviously didn’t have a siddur party at their schools.

Flags: I understand that in order to be a modern orthodox shul, you have to give your full allegiance to the flags of Israel and America, so much so, that we place them right up in front of the shul next to the Torah. We are basically davening to the flag, the rabbi (and all the other folks sitting up there) and the flags.

Children singing Anim Zemiros: In yeshiva they didn’t even say anim zemiros, in my shul now they don’t say it either and in most non-MO shuls they say it but without a whole production. I just realized that I absolutely hate it when they have kids do the last part of davening. I’m sure it’s all about chinuch (I’ve noticed that the kids with the least amount of chinuch are the ones who do it) but it’s kind of whack to sit through such a long service, only to extend it even longer. The worst situation is when you don’t have any kids who are that young and they have some 15 year old who doesn’t even know how to daven.

Two shabbos morning Drasha’s: In many shuls, the rabbi feels like he needs to give a summary of the parsha right before laining. I find that in most cases, the rabbi decides (maybe the board decided) that it’s his time to shine and throw in a second drasha for free. One lame ass drash where we forget it the second musaf starts is enough.

The Torah walk around: If you feel like you need to kiss the Torah, go to the front of the shul and do it. Do you realize how much time is wasted when they walk that darned Torah around and bend down so every kid and his grandma can kiss it. At least they could pick a different tune for the song they sing and have some spirit.

Healthy Kiddush: I’m not blaming all of the MO for this travesty upon the nation, but the idea of a healthy soda-less, herring-less, cholent-less kiddush is so appalling it ranks right up there with separate seating at weddings and slow lecha dodi tunes. Kiddush is not about carrot sticks and water, it’s about cholent, soda and crappy rugalech.

3 hour davening: The only time davening should be 3 hours long is during the yomim noraim, unfortunately the 3 hour davening disease has extended itself beyond modern orthodoxy and some frum shuls have adopted this terrible thing. Shabbos morning davening should be no longer than 2 hours, but somehow (by adding extra prayers, having children singing and all those extra speeches) Modern Orthodoxy has adopted the 3 hour shachris and it’s terrible. I always felt that one of the reasons the davening was longer as you went down in religious observance, was because religious folks came to shul every day so they didn’t need that added time to get them through another week of no shul attendance.

Low Mechitza: I was never a fan of the low “modernishe mechitza” besides for the halachic questions of davening in front of so much ervah (most of it not even good ervah that you want to look at) the low mechitza is like leggings, it doesn’t leave anything for the imagination. It also doesn’t allow for good scratching of your balls and ass and when you have a wife she can watch you checking out all the women (my wife says that I’m not stealthy enough when checking out other women)

Rabbis that switch their suf’s for tuf’s: It seems that most MO shuls have rabbis who are way frummer than the congregation. Like this one shul I used to go to NY that the rabbis kids were in kollel, while almost half the shul was not shomer shabbos. I have noticed through my travels that many rabbis will daven in the modern orthodox nusach (American Hebrew that sounds terrible) even though they themselves use a regular litvish nusach. I think the worst is when they say things like Ma’ariv and Seudat Shlishit with everything sounded out.

Ushers: Not every shul is fancy enough to have ushers, but my worst nightmare is to be shown to a seat by an usher. What is this a movie theater? Sure, I hate getting into a makom kavuah clash with some crotchety old man, but I’d rather fight over places than have to be shown to the front of the shul with no escape.