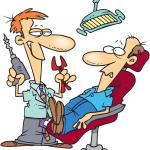 Due to Obama’s failure at giving me free dental insurance, I haven’t had a chance to visit the dentist. Due to my lack of dental visits, I haven’t really gotten to experience the fear of getting teeth work done. I know people who aren’t scared of the dentist, but I don’t know anyone who’s into going to the dentist (if people have a fetish for getting their balls kicked, I’m sure there’s a dentist fetish out there). Last time I went to the dentist, I had some wisdom teeth out and a root canal, but it was almost free (in most normal frum communities there’s a dentist who can hook you up, in my community you can get hooked up if you need to develop some search engine software). So in lieu of my pending dental emergency I started to think about all the sins I’ve done with my mouth.

Like most people, I turn to the Lord my savior when I’m faced with some sort of trouble, but unlike most people I also turn to him when things are going well. My theory is that God makes stuff go well to see if you’re paying attention to the source and the second you start missing tefillin or speaking up about your skepticism he smacks you down. I’m more apt to ignore my Judaic duties when life is mediocre.

I started thinking about the wrongdoings of my mouth just as I made the wrong bracha on a piece of cake, how spaced out does one need to be to make a ha’etz on cake? I could see my rosh yeshiva shaking his fist at me and his screaming that shabbos afternoon mussar shmuess about being in front of the king and making brachos properly. It’s not just blessings on food of course, it’s everything to do with talking that leads me to believe that I’m due for some smackdown kapara. I’ve been working on my loshon horah lately (it’s affecting the shalom bayis, because when you stop speaking loshon harah there’s not much left to talk about), but I’m no saint and hosting shabbos meals is like inviting a loshon horah party into your house. I guess being married takes away the whole dating loshon horah, but then it’s substituted by marriage loshon horah.

It’s actually pretty scary once you start to think about all the shit that comes out of and goes into your mouth, I’m talking both tangible and spiritual here. Lets say I didn’t check the spinach properly and just ate some crunchy little bugs and then maybe I didn’t say a bracha, spoke shit about someone and then because I was deep in a slander and gossip-filled conversation I forgot to say a bracha achrona…sounds like I may need a root canal, compliments of God and his kapara for the mouth ways.

I never actually thought about the midah keneged midah of sinning with the mouth and then being faced with dental emergencies…of course in this case it’s compounded by the lack of dental insurance which means I’m facing some pretty serious monetary kapara. I attribute this to my forgetting to keep up with that extra shema koleinu parnassah prayer.