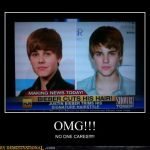 Since we got married, I’ve been trying to learn the married Jewish lady dance on Facebook. You know, learning to ‘like’ the most inane status messages about what the other women have to do that day (so get off of the computer and do it, shit!) and the ubiquitous lists of what they’re serving for shabbos (honey, you made chicken, kugel, and broccoli salad last shabbos, what makes you think I need to read that again?). The thing I can’t get into is commenting on baby pictures about how “yummy” or “squish” they are. What downright irks me, though, is the use of “OMG!” everywhere.

I’m very careful to use “omgosh” at most. Frankly, I can’t imagine why anyone would need to call upon the Almighty just because your cousin-thrice-removed posted a picture of her 12th kid with a bow Velcro’ed onto her head, and I couldn’t care less how good your pasta turned out at Café Venezia last night. Why bother the creator with such things?

Picture it: there’s genocide, starvation, war, and sex crimes going on the world over, but these ladies (it’s never men) can’t seem to stop themselves from drawing His attention to the fact that they really really like how their sem friend’s hair came out for her vort. Granted, yes, it did look fabulous, but do you really think it’s wise to divert His attention from the horrors of the world just so He can look down and say “yeah, she’s right, that’s a tight-lookin’ updo she’s got going on there”? Do you think He’ll ‘share’ the picture with his melachim friends? And if it is so important, do The Guy the courtesy of spelling it out, not reducing it to three letters as if you don’t have the time.

So settle down, girls. As awesome as you think your niece’s flowers came out at her wedding, think of the real issues of the world, and think of how much attention you’re detracting from my fantastic challah pictures. For G-d’s sake, please.

← How do you feel about the Shoah?
There are no atheists in a foxhole or at the dentist… →