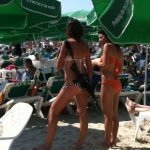 When you strip away all the BS about family, yichus, education, hashkafa, seminary and white tablecloths it all comes down to looks. All we (both men and women) care about is how our potential shidduch date looks. Case in point, no matter how bad the date sounds to either side, the second I send the picture it’s decided.

At one point I was trying to set up this really hot girl (in the world of hotness ratings she was a 9, only because she wore skirts and we really didn’t know what lurked in her crotch area – could have had a big mound or FUPA for all we knew, but her tznius ways saved her ratings and hurt them at the same time) who didn’t have a lot of compatibility on paper with some of the people I tried to set her up with. I would go through the shpiel on how she was a good girl, from a good family, but they weren’t wealthy and she didn’t have much going for her except for stellar bikur cholim and chesed activities. Most guys couldn’t give two shits about their future wives visiting terminally ill folks or letter stuffing for kiruv events and so almost every guy would turn her down, but as a courtesy to pretend like they were considering it, they would ask for the picture.

The second they saw the picture (whoever I agree to put into my shidduch rolodex has to give me a clear full body picture, none of that standing in the shadows next to a big colunm BS. I also don’t tolerate those pictures of girls sitting down at weddings or crouching.) they always said they would give it a chance. Not once, did I show the picture of the really hot girl and get a “no it’s not for me” response. Every single one of the guys who initially said no, changed their minds.

I have never had this extreme example happen with girls, because the universal hotness standards don’t exist. I have definitely set up more than a few girls with guys who they initially refused to go out with until they saw the picture and changed their minds. They always pretend like they are doing me a favor by dating a guy just for looks.

93 comments for “Shidduchim: It all comes down to the picture”