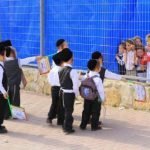 I used to love it in high school when the Rabbis would go on tirades against the all the other religions, they would talk a lot of smack about how Judaism made the most sense. Admittedly Judaism makes the most sense, but that’s not too great because Judaism as it is practiced by us orthodox folks makes us look completely insane. I never understood how someone could mock the other religions, when we had things like eruvim, tefillin and bris milah, but hey 600,000 people supposedly saw the revelation at Sinai and every other religion doesn’t make such outlandish claims – so there!

1)Kaparos: Everyone wants to rid themselves of their sins every now and then, but swinging a live chicken over your head is just downright crazy. I always wondered why no one ever pointed out the great similarities between chickens dying for our sins and our good friend Jesus. Sure, they didn’t kill Jesus with a super sharp knife to the jugular, but those chickens really only count for one family and not a whole religion of people.

2)Hot Sheitles: I’m fairly certain that the hair covering thing was a periodic thing that stayed with us through the ages, I’m also fairly certain that whoever jotted down the laws pertaining to married women covering their hair and “saving” it for their husbands didn’t have the Hot Chani thing in mind. I can’t imagine that anyone in their right mind thinks it makes sense for a women to save her ragged hair and sometimes shaved head for their husbands while everyone else gets to see their sexy new wig, but this is the social norm of the frum community.

3)Bug Obsessions: If you look at the list of vegetables that kosher mafia organizations don’t provide protection to it looks very similar to the list of veggies that anyone who wants to maintain a healthy diet should eat a lot of. Leafy Greens, broccoli, Brussels sprouts and those pesky berries. God forbid we should eat a bug that cannot and will never be seen by the naked eye unless you hold it up to a very bright light and then douse it in soap to rid it of these pesky insects. I’m of the opinion that whatever can be made into business by the kosher mafia and its henchmen will be made into a business.

4)Bedika Cloth Shayala’s: I’m not exactly sure why the frum community, which is obsessed with tznius and keeping women in the home will not do away with the embarrassment of a women showing her bedika cloths to a rabbi. Did you know that some women send bedika cloth samples in the mail for review. It’s completely insane that there are no women inspectors in the frum community. God forbid the women should have any halachic knowledge, lest they overthrow the gedolim.

5)Shatnes: It makes no sense and it never will, I vote taykoo, but at least everyone acknowledges that it’s completely insane. At least we are giving some folks a living, because there’s always that one guy who has a shatnes lab set up in his house and he’s always interesting to talk to because he looks like a shlub, but knows more than any metrosexual about fabric and suit styles.

Tefillin: I do it every day and try not to think about the logic

Lulav: Just another homoerotic experience for men in shul, kind of like kiddush clubs, hakafos and making sure to catch every second of the bris

Accepted organ donations from goyim yet refusing to donate our own

Segregating the sexes from preschool onward and stunting them socially so that they must rely on a go-between and “kallah/chosson teachers” in order to interact (and have physical relationships with) with their future spouses.

Claiming to be authentic

Shidduch system in which a 25 year old man must call up his mothers friend to tell her that he won’t go out on another date with the girl – the woman than explains it to the girl – all in the name of modesty or insanity, you choose.

Complain about tuition prices when we can just send out kids to public schools and they would probably turn out more respectful and smarter than many of their yeshiva counterparts, it also may do a better job at keeping kids on the derech – God forbid we even have the hava mina.

Eruvim in the modern city

Violence against women in the name of modesty