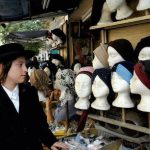 I’m not sure why, but whenever I’m in New York or another large orthodox community I suddenly like to hide my Jewishness. Normally, I wear my yarmulke and tzitzis everywhere, but the second you put me in a place where Jews are everywhere I want nothing to do with them.  think it has something to do with being embarrassed by my own kind. In my neck of the woods no one knows from Jews, my wife always says that when we’re walking to shul on shabbos that everyone must think we are Jehovah’s Witnesses.

Most folks I know are somewhat embarrassed to be Jewish outside of their own communities. I’m one of those whose mildly against people for not wearing their yarmulkes to work (in the case where they go bareheaded), I say mildly because I used to remove my yarmulke when I went to buy porn and so I kind of understand the situation. My theory is that if you have to remove the signs of your Jewishness, it’s kind of like you lack belief that God’s going to have your back in some way. I also find it strange when you encounter your supposedly frum shul going buddy during the week without any signs of Jewishness, it just strikes a strange cord with me, yet I’m the one that doesn’t want to look Jewish around all those damned Jews.

I do admit that when I live on the East Coast I was a bit embarrassed to be associated with the Orthodox community, you can read my writing from the era, it was downright angry. Now, being far removed from regular frumkeit (plenty of frum Jews in the Bay Area, but hardly any who would not be labeled as out of town Harry’s) has made me happy in my Orthodox Jewish lot, of course I rarely see Jews outside of the regular places, but I do get comments every once in a while – which are usually friendly and inspiring for some reason.

Definitely not self hating, but slightly self embarrassed for sure.

16 comments for “Maybe I’m just a self embarrassed Jew!”