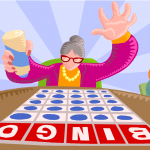 I’ve been told that there are quite a few ins and outs regarding the halachos of gambling. Most of them, though, deal with dice games. In Tractate Sanhedrin, dice gamers are called kubiustos and it is said that they are afraid of daylight. I always feel like shit after a night of gambling and don’t want to face the daylight, either, but they were probably referring to something more kabalistic when they said that. There are all these references to doing things with your left hand in these discourses. Why is it that everything fun and forbidden has to do with your left hand? I can’t say I’ve ever actually seen anyone masturbate in an Indian casino.

You can’t gamble against somebody and take their money (lest your opponent be a Jew), but you can participate in a lottery. Don’t buy too many tickets, though: if Hashem deemed that you should have that kind of money on Rosh Hashanah, then it’ll only take one set of numbers to score the divine jackpot.  There are a number of leniencies available, obviously, or we wouldn’t be able to rob our rabbis’ children of their hard-won chocolate eight nights of the year. Or more.

Synagogues (and, l’havdil, churches) have an unalienable bond with bingo games. You can drive past any Catholic neighborhood and view the sea of banners advertising spaghetti and bingo nights, but it’s the synagogues and yeshivas, though, which are known for having the hottest games in town. Try stepping into one of those yeshiva-sponsored bingo halls that seat 500+ and tell them that what they’re doing is assur. They’ve got tens of thousands of dollars and armed guards to tell you that it’s not. The bingo-is-assur crowd is small, but it does exist.

I’m thinking that I’ll keep my gambling in the privacy of my own home, thank you. I don’t want anyone to see me applying my quarter to a scratch-off ticket with my left hand, and I don’t want anyone to hear me scream when I win my millions in the lottery. I’m going to join the ranks of my shady friends that do all of their gambling online. I might be on partybingo.com or on bingobeth.com while they’re flogging some high-stakes poker site, but at least I won’t be seen squinting into the sun as I grudgingly hand over my ma’aser. At least there I’ll have a chance to win back everything that I’ve dunked into all those Chinese auctions. My set of cherry wood bookshelves with the complete Shas hasn’t arrived yet.

86 comments for “Is Gambling Assur?”