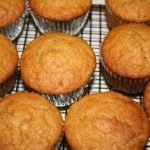 Since food is one of the most important aspects of the frum community, it’s no wonder that the great kugel vs. cake debate is alive and well in many parts of the frum community. In the mid 90’s, the latest food to grace frum shabbos tables across the country was cranberry apple crumble. Many balebusta’s, took the humble desert known cranberry apple crumble and elevated it’s madreiga to kugel. After kollel wives realized they could forgo the traditional potato, yerushalmi and salt & pepper kugels in favor of the cool hip cakey kugels, many detractors started to debate about whether or not mini carrot muffins, zucchini bread or cranberry apple crumbles could really be called kugel.

Even though I love cranberry crumble and little carrot muffins, I was an outspoken critic against such practices. It confused me quite a bit, especially when I was trying to appear frummer than I really was “Rabbi, am I supposed to make a mezonos on this zuchinni kugel because I still hold it’s cake?” Yes, I got looks for such ridiculous halachic shayala’s, but I got the ladies thinking I was kollel material.

The most outspoken critics were the modern orthodox singles, they would mock those “silly frummies” for thinking cake was kugel and serving it with cholent. Eventually the kugel cakes reached even the most modernishe of communities and I’ve been told that even Rabba Hurwitz’s husband (the rabbitzen?) serves them at their shabbos day meals.

I’m certain that the debate rages on, I’m sure there are families that won’t intermarry with those who are against the serving of cakes at the main meal, but I’m not so sure it’s as big of a deal as it was when it first appeared on the scene. I only thought of it this past shabbos because I was faced with a dilemma. We had our first real shabbos guests, a family and they had sent over a cake before shabbos. This meant that I had 3 deserts, for I had already made apple pie and parsnip cake, at the last minute right before I removed the crock from the crock pot, I decided to serve the parsnip cake as a kugel. I cringed at my reversal of opinion, I kind of hoped no one would ever find out that the most diehard cake defender had defected and served a cake as a kugel.

I hate to say it, but the sweet and savory components of the parsnip cake worked pretty well as an accompaniment to the thick and hearty cholent, but I’m not sure if I’m all the way converted over to serving cake as kugel when I’m not in such a dilemma.

17 comments for “The great kugel debate: Is it cake or kugel?”