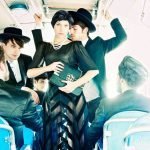 One of the toughest things I’ve had to do recently is to try and explain frum inconsistencies to people who couldn’t get a grip on reality. The reality that Orthodox Jews are not perfect and in fact they are inherently flawed with numerous inconsistencies on a daily basis. We will go out of our way to find extra kosher meat, the tallest mechitza, the strictest tefillin and then blatantly skip davening. It’s not just me, it’s everyone, but those darned BT’s and non-religious folks sometimes find it hard to believe.

I have a friend from the bay area who recently went to NY on a trip, he was disgusted at “the lack of kavannah” in shul. He said that he couldn’t even keep up with most of the davening because it was too fast, people were talking throughout davening and that it wasn’t a friendly atmosphere. I think he was expecting this Jewish Shangri-La that every Baal Teshuva thinks NY will be. He was badly mistaken, he jetted back here and I think the trip scarred his Jewish sensibilities for life.

I’m always curious how the ultra-out of town BT will react to big city orthodoxy. It is a life of contradiction and inconsistency and some people can’t deal with it. I have a friend who’s having trouble with dating, she says that she can’t understand how a guy can be so strict with kosher and Shabbos and then want to hook up on the first date. I tried to explain the concept of a 612er to her, but she still didn’t get it. I said that 612er’s (I had personal experience with it) were folks who considered themselves frum, except for when it came to sexual opportunities. Many 612er’s don’t necessarily seek out sex, but if it comes along they will take it. If you go and seek out you’re probably over on more issurs than just 1 and this would negate the whole 612er thing.

I understand the fallacy of 612ers and other frum inconsistencies, but it’s even harder to explain it to folks who didn’t grow up with orthodoxy. Those folks who are trying their darndest to be all they can be are troubled by the fact that I think full hallel is a bitch. There I said it, I just think that ahavti and lo lanu ruin hallel. Hallel has this familiarity that allows it to be said fast and in song, but those two pragraphs make it go from pleasure to pain in the ass really quickly. It gets relegated to something you really don’t want to say, but are willing to fight that damn yetzer harah for 10 days out of the year.

I was talking with a BT friend recently about davening and how he takes a long time because he’s new at it. “You should just skip the long stuff” I told him, he looked at me with bulging eyes as if I’d just shown him his first dirty magazine, “what do you mean skip?” he said. I gave him the laundry list of all the things I and so many other people are likely to skip, basically all the Aramaic, anything that takes up more than a half page with no breaks and the Wednesday yom. He couldn’t understand how an FFB could possibly justify skipping any part of the morning prayers, or why anyone would want to.

No one is perfect, but you’d think that a religion full of supposed believers would be a bit better, or maybe not. I think that besides for the perils of girls and masturbation, my high school mussar education was predominantly about how to act in front of the “king”. I’m not sure I can count how many times I heard the line about “how can we rush through davening or sleep through it when we have a chance to converse with God himself” Now how many folks actually believe it, if I was a true believer I wouldn’t have rolled out of bed and davened in my living room this morning, I would have been dressed up to meet the king at 6:30am. The king can wait, I need to sleep until 10am.

Sometimes our inconsistencies are too much to bare, many of my friends who have left the faith did so because they couldn’t deal with the guilt of not being perfect. Thank God we have a religion of picking and choosing, just because I watched some hardcore animal porn last night (shalom bayis reasons) doesn’t mean I can’t get up and daven for parnasah (doesn’t mean God gives a rats ass either). Of course, if you live in Mea Shearim the modesty patrol will show up and kick you out of the community for a sin you committed that harmed no one besides the animals involved and maybe your penis.

The problem with frum inconsistencies is when the BT or Convert ends their “everything is so spiritual and amazing” stage and enters real life. They leave the cocoon of the kiruv rabbis lavish Shabbos table and join a community. Then the fun starts, over the years I’ve gotten hundreds of emails asking me to write about the “problems” within the community.

There are so many problems and the reason they are problems usually stems from the fact that not everyone can be consistently religious when it comes to everything. Whether it’s domestic abuse, tax fraud, child abuse, government scamming, agunot or dozens of other items which don’t jive with being an ehrliche yid – many folks – especially those new to the religious community and outsiders feel like making blanket statements against the orthodox community based on such fallacies.

For most folks, it’s hard to separate individuals or sects from the religious Jewish community as a whole. Just because some chabadnicks are Jews for Jesus-ish, some hatzoloh guys run red lights when not on emergency calls, and some modern orthodox women who wear pants want to say hallel on Yom Ha’atzmaut – doesn’t mean their entire communities are bad.

I’ve been asked the following question many times. “I’m surprised that you’re still religious, how can you be after you’ve seen so much crap in the community?” To which I always respond that I don’t judge Judaism by the Jews. It’s bad practice to look at individuals or groups of people who do something wrong in the name of Judaism and assume the whole religious community has gone to shit. Well it may have gone to shit, but it doesn’t mean the religion isn’t worth practicing.

← Kavannah development
The Zionists and Jews are the cause of the Newtown massacre! →

71 comments for “Frum Inconsistencies: Don’t Judge Judaism by the Jews”