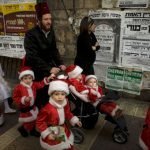 Let’s face it, as an FFB I’ve been deprived of some pretty pivotal moments in life. My father never told me to use protection, I never got to go to prom (I still have no idea how to dance with women), I’ve never had a bacon cheeseburger and I’ve never had the opportunity to celebrate Christmas. Am I alone in this opinion? Are there no other Jews who grew up frum and remain frum who will admit to having a twisted fascination with the most goyishe day of the year. It’s not just the goyeurism that intrigues me, it’s the fact that for the first time in my life I have non-Jewish family with which to enjoy a honey baked ham dinner and stocking stuffers with.

Unfortunately for me, my mishpacha doesn’t have the minhag hagoyim of wajking up and opening presents early in the morning after Santa delivered them. Shit, I don’t even think they have chimneys in Southern California and if they do, they sure as hell aren’t brick. So, I can’t have my traditional Christmas, I’m willing to go outside the mesorah just to say I went to a family Christmas dinner and so that I can tell people I brought a ham.

As a pure bred FFB (I think my brother and I are the only people in our entire extended family to marry girls who grew up wearing pants, I wonder if the yichus is rolling in their graves ) I haven’t ever had the opportunity to by a ham for people who could eat one according to halacha. Most of my friends who eat ham are former FFB’s and we would both be getting aveiros if I were to them a ham. Come to think of it, I should probably checked with the Honey Baked folks to make sure that the ham I get my in-laws isn’t made with bassur v’chalav.

I should reiterate that I’m not going to become a non-practicing non-Jew who celebrates consumerism based holidays with little recognition to Jesus, I just want to live the dream portrayed in movies like Home Alone. This has nothing to do with becoming a Christian, all I want to do is sit around with folks wearing ugly sweaters, drinking hot chocolate and talking about their winter cottages in Tahoe.

54 comments for “Marrying a convert has its pluses: Christmas with the in-laws!”