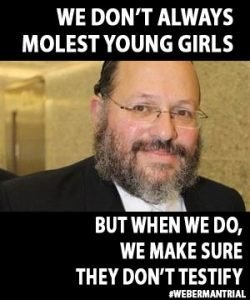 Do I really need to add my two cents? I could probably talk all day about the deafening silence from the frum media and leaders, but instead I’ll just give the floor to Rabbi Fink who always seems to say it better than I do, when it comes to serious situations. I will say that I’m not surprised that no one considered a community leader besides for Yaakov Horowitz has even bother to speak about this case. I guess I’m not even surprised that the Satmar rebbe called the accuser a whore. I guess we can say that abuse cover ups seem to be so normal in the frum community these days that it’s hard to shock me.

Nechemya Weberman has been found guilty on 59 counts. The unlicensed therapist with ties to the infamous Vaad Hatznius was accused of abusing a teenage girl and there are rumors of many other victims swirling.

In what must have been a grueling two weeks, the young woman who stood up against Weberman was strong and resilient. She is took a bully down. Today Weberman’s fate was sealed. It is likely that he will die in prison considering his age and the number of years his counts carry. The case was monumental and ground-breaking simply because there was a case. But with the verdict and future sentencing forthcoming, the case takes on additional significance.

First, the sobering news. I was not at the trial, but I did not read anything that indicated that there was any physical evidence or corroborating witness testimony. It’s scary that Weberman was convicted on these facts. Innocent or guilty, there were very few facts with which to nail him. On the one hand this might mean that innocent people can be convicted of these crimes. I am not saying the Weberman is innocent. I think he lost his chezkas kashrus a long time ago. But it is possible that similar facts could be asserted falsely. That is a little scary because it might cause a reprisal of rabbinic and lay reluctance to pursue these cases in court.

But it does teach the frum community something very important about sex abuse. The non-frum public take it extremely seriously. Sex abusers are hated by the public and are even hated by the prison populations of our most hardened criminals. No one likes a sex abuser. For some reason, the frum community is only just now coming to grips with this reality. We are too soft on sex crimes. We are not a “light unto the nations” when it comes to abuse. Hopefully, the visceral reaction of the public and the strong condemnation by the jury will teach us a lesson in taking this kind of thing more seriously.

Advocates for survivors of abuse have been following this case closely. However, I am not sure that survivors have been following this case closely. The survivors I have spoken to have been detached from the proceedings. I think this is important to recognize. Survivors, or victims, whatever you want to call them live with the guilt of silence. It is almost as if Weberman’s accuser broke their code. They are happy for her, but it only compounds their pain that their abusers are still at large. I urge everyone to be mindful of this as they discuss the guilty verdict.

Overall, this is a great victory. It is a victory against tyranny and intimidation. It is a victory against abuse of power and self policing (or lack thereof). It is another nail in the coffin of the myth of the “perfect, insular community” and is a step in the right direction. By that we mean, a time and place where safety for our children is more important that communal reputation and rabbinic power. We cannot allow unlicensed therapists and non-professionals to treat our children. Look what happens when we do. This is the kind of case that can open the floodgates. And don’t kid yourself, there are hundreds, if not thousands of cases that have not been brought forward. When the floodgates open, there will be a flood. We have ignored this scourge for too long, if we won’t clean our own act up for ourselves, the state and federal authorities will do it for us.

For decades, abuse victims have been made to feel like they are the villains and their attackers are the heroes. Now they can see how the public feels about their story. The public is outraged. The public wants vengeance and will not stand for cover-ups. That outrage will need to spill over into the frum community.

In order for our community to handle abuse properly, three things need to happen.

1) We need to discard the concept of mesirah. The word needs to be excised from our lexicon and it must be relegated to an anachronism and relic of the past. If you need three poskim to explain why there is no prohibition of mesira in sex abuse cases read this: Mesira (The Jewish Informant) in Halacha. People who cover up abuse are thousands of times worse than any moser. Stop covering up and making excuses. We cannot stand for this in our communities.

2) We need to understand the horrible effects of abuse. We don’t get it. We never really will get it. But we need to know that it is much worse than we could possibly imagine. Here are just some symptoms of abuse (that do not apply equally to all survivors). Abuse victims contemplate suicide. They don’t trust anyone. They hate Jews. They hate God. They cannot be intimate. They are scared to commit to relationships or jobs. They seek escape via substance abuse. They cry every day. They become numb and cannot feel anything. They isolate themselves. They never grow up. They need to spend thousands of dollars on therapy and are never really cured. As much as the abuse hurts, the apathy from the frum community hurts even more. Which brings me to number 3.

3) We need to accept survivors into our community with love and affection. We cannot judge them. We cannot allow them to feel second class. We cannot protect their abusers. We must tell them that we do not accept the monsters that harmed them into our communities. We cannot choose monsters over innocent victims. But here is the hard part. We need to acknowledge their pain and suffering without making them feel like they are damaged goods. Yes, their lives have been severely affected for the worse. But they can live beautiful, meaningful lives. We just need to let them. We cannot screen abuse victims from shidduchim and we cannot excuse bad behavior because one is a victim. Yes, they are going to have a hard time because of everything that we still need to understand about the harms of abuse. But that’s okay. We need them to know that we don’t mind if they have a few issues here and there. Who doesn’t? They cannot be stigmatized, otherwise they will never come forward and we run the risk of losing another generation of sex abuse victims.

← Will Lipa Schmeltzer be put in cherem for featuring Hot Chanies in his latest video?
Most Chanukah videos suck! →

77 comments for “Nechemya Weberman is guilty”