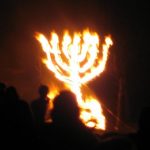 My wife I were out in San Jose last night and there happened to be this Holiday carnival going on last night. We squeezed our way through this invasion of Mexicans to find some decent San Jose territory to walk around, we just wanted to sample the cool night area and possibly get our drink on when we saw the Chabad of San Jose menorah forcing the throngs of cotton candy and kettle corn eating folks to walk around it. I’m fairy certain that 99% of the folks at this carnival had no idea what this weird thing was, they probably didn’t notice it at all, but I noticed it and there is a certain sense of Jewish pride that welled up in me that’s inexplicable.

Until a few years ago I never knew that there was controversy behind public menorah lightings. I always thought that everyone was for em’, Jews had something to be proud of when everyone else had Christmas and orthodox Jews had some sort of holiday celebration to go to in towns that usually had nothing else going on. In Rochester and Albany it was definitely like that, we’d go downtown and watch some bearded fellow climb a ladder, light the menorah all the while we would be eating latkes and jelly donuts and scoping out the cute chabad girls milling about.

Apparently both non-Jews and Jews have something to gripe about when it comes to public menorah lightings. Sometimes chabad has trouble securing permits and public controversy arises out of it, but when no political controversy arises there is still some griping to be found. It seems like everyone has an opinion about public menorah lightings. I’ve heard frum Jews saying that it’s a chillul Hashem and non-religious Jews saying it’s bad because it looks like we are trying to “compete” with Christmas.

In my opinion, all of these varying opinions make perfect sense. Even though I get a sense of pride that we Jews can finally publicize our religion without the threat of being killed or being thrown out of town, I understand that many Jews don’t feel the same way. I’m the type of guy that wears my yarmulke and tzitzis everywhere and has tremendous Jewish pride (except when I’m in NY), but it seems that outside of major Jewish cities this is not the common thing to do. Rarely do I even see folks around here wearing yarmulkes outside of shul, they wear baseball hats and tuck in their tzitzis, so how should they feel about “in your face Judaism” aka the public menorah lighting?

Then again, the public menorah must make some Jews feel good, as I’ve heard from quite a few intermarried, assimilated and otherwise non-affiliated Jews that they love the public menorah, especially ironic considering the fact that Chanukah is anti everything that their lives stand for.

We can probably go into an entire discussion about how Chanukah is the anti-assimilation holiday and therefore the public menorah is a necessary icon in the war against intermarriage. Or is the public Jewish stuff embarrassing people enough to want nothing to do with those crazy Jews.

So how do you feel about public menorahs?

← How Much More Isolated Has Israel Become in Just the Past Year?
Will Lipa Schmeltzer be put in cherem for featuring Hot Chanies in his latest video? →

40 comments for “What do you think of public menorahs?”