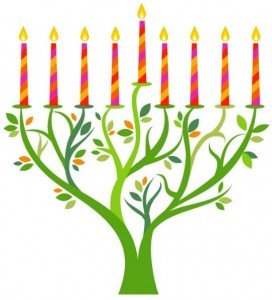 The holiday of Chanukah is celebrated annually to commemorate the rededication of the Holy Temple of Jerusalem which took place in December 164 BCE.  On the third anniversary of the Temple’s defilement through pagan sacrifice at the hands of Jewish Hellenizers, the Temple was restored to pristine Jewish worship of God in accordance with the Torah’s commands.  This reversal of fortune for the Temple was made possible by the guerrilla warfare of the Maccabees, who attributed their unprecedented military successes to the will of God.  According to rabbinic tradition, in the following year the Hasmoneans decreed an annual eight day festival of praise and thanksgiving.

Considering the historical basis of Chanukah, it is something of a wonder that the holiday continued to be observed even after the destruction of the Holy Temple by the Romans in 70 CE.  Why persist in celebrating the rededication of a Temple which would only survive another 233 years and which is no longer extant?  The rabbis of the talmudic era were truly bothered by this question.  They never doubted that Chanukah was still obligatory, as four centuries of uninterrupted observance tended to confirm.  Beyond the evidence of popular practice, the Mishnah reports that messengers were sent out, even in the post-Temple period, announcing the New Month of Kislev so as to ensure timely observance of the rites of Chanukah. The question remained why our people would tenaciously hold onto the memory of a temporary salvation, seemingly made irrelevant by the innumerable ups and downs experienced in the intervening years.

In many ways the deck was stacked against Chanukah.  Its narrative and rituals are not found in the Torah or even the later Biblical Writings.  The holiday was proclaimed by Hasmoneans, who had a tumultuous relationship with the Pharisees (progenitors of Rabbinic Judaism).  Although the Hasidean proto-Pharisees participated in the Maccabean revolt, they abandoned the revolutionary cause during the truce of 162 BCE.  The Hasmonean dynasty soured on the Pharisees.   For several decades under Hyrkanus I, Aristobulus I and Alexander Yannai they vigorously persecuted the Pharisees while siding with the Sadducees.  In 63 BCE the Pharisees went so far as to petition Pompey for the dissolution of Jewish independence under Hasmonean rule in favor of nominal autonomy under Rome.

The halachic basis for Chanukah is its appearance in the 1st century tract Megillas Ta’anis, the first ever Tannaitic work to be put into writing.  This “Scroll of Fasts” is actually a list of thirty-five days in the calendar when one is forbidden to fast in commemoration of various Jewish victories, some against Gentile oppressors and others against Jewish sectarians.  On Chanukah, being one of the more important of the minor-holidays, it was forbidden to fast or deliver eulogies.  In the early amoraic period (3rd century CE), the rabbis debated whether or not these quasi-festivals were still mandatory given the destruction of the Second Temple and the complete loss of Jewish sovereignty.  The most zealously nationalistic of the rabbis, Joshua ben Levi, insisted that Megillas Ta’anis was still in full legal force.  Taking the political reality into account, Rav was of the opinion that the minor festivals had been abrogated and were, consequently, null and void.  The halachic conclusion was that, for the most part, Megillas Ta’anis was no longer binding.  Hence, minor-holidays such as the Day of Nikanor would be known only to antiquarians and not the common Jew.

The cause for Chanukah was also hurt by the attitude of Rabbi Judah the Patriarch, who codified the Mishnah in the late 2nd century CE.  Unlike Purim which was given its own tractate, Chanukah is conspicuously missing from the Mishnah.  Only stray references to Chanukah can be found in tannaitic literature.  The laws of the Chanukah, which are primarily discussed in the Babylonian Talmud (Shabbos, chapter two), are developed almost exclusively by the Amoraim of the 3rd century and later.  Various theories have been proposed attempting to explain Rabbi Judah the Patriarch’s snubbing of Chanukah.  The most popular theory is that being descended from Hillel and the Davidic dynasty, he was anti-Hasmonean due to the latter’s usurpation of Jewish political power.  However, a careful analysis of Rabbi Judah’s actions throughout his career will reveal that he downplayed all nationalistic holidays of rabbinic origin.  Having been raised in the wake of Bar Kochba’s failed rebellion and the utter devastation which followed, he was keenly aware of the need not to antagonize the Romans.  By deemphasizing Chanukah, Purim and the four fasts, Rabbi Judah was attempting to preserve a delicate modus vivendi worked out with Rome.

Despite all of these hurdles, Chanukah not only survived but thrived and became a beloved part of Judaic tradition.  This can be partly explained by the shift in emphasis which occurred during the Herodian period.  With the Hasmonean dynasty ousted from power and summarily executed by their Idumean successor, the holiday of Chanukah could no longer afford to glorify the military exploits of the Maccabees.  Instead the focus became the lights of the menorah, and the legend of a cruse of pure oil probably originated in this era.  Chanukah took on a decidedly more spiritual character.  Within a generation, the schools of Shammai and Hillel were already debating the ideal method of candle lighting.

The Talmud (Bavli Rosh Hashanah 18b) reports the halakhic basis for Chanukah’s staying power in spite of the abrogation of the other holidays enumerated in Megillas Ta’anis: “Rav Yosef said that Chanukah is different because it has a commandment associated with it.  Abaye retorted that it and its commandment should both be abrogated.  Rav Yosef responded that Chanukah is different [and should be maintained] because the miracle has been widely publicized.”  In this very terse interchange, two immeasurably valuable lessons can be learned regarding the purpose of religious ritual and the sociology of religion.

Abaye rightly rejected Rav Yosef’s first explanation.  Why should Chanukah outlast its usefulness just because we happen to light candles each night?  Ritual alone can be a hallow act devoid of religious substance.  Rav Yosef’s second explanation gives both the ceremonial act and the overall holiday it lasting significance.  The candles publicize God’s miraculous intervention in the lives of our ancestors.  Whether that intervention came on the battlefields of Judea or in the mythic jug of oil, God’s beneficent presence is recalled.  No matter how overwhelming the odds, the Almighty can bring salvation when He so chooses.  Ritual at its finest is actually practical theology.  Through ceremonial acts we come to realize or reaffirm our core beliefs.  Accordingly, it would be a shame to abrogate a mitzvah suffused with such meaning simply because of a change in our political fate.  As Rashi commented, it would have been a mistake to nullify the commandment.

However, it is worth reexamining Rav Yosef’s first explanation.  Admittedly, the notion of inviolability for outdated commemorative rituals fails at a philosophical level.  However, at the sociological level it is absolutely true.  Ritual, and for that matter liturgy, often refuses to die a natural death.  Once an action becomes part of the sacred tradition, it stays there even when the forward march of history makes its continued observance illogical.

Furthermore, I believe that Rav Yosef was advancing an even stronger argument.  He was pointing to the ritual of candle lighting as evidence that it was the intention of the holiday’s founders for Chanukah to survive in perpetuity.  As the eminent historian Yosef Hayim Yerushalmi wrote in his classic work Zakhor, “The collective memory is transmitted more actively through ritual than through chronicle.”  In other words, abstract ideas do not survive unless concretized in some ritual act.  But once firmly rooted in religious behavior, memories of yesteryear (both mythic and legitimately historical) will stand the test of time.  None of the other minor-holidays had associated rituals, and so, justifiably, they all withered.

This lesson in the sociology of religion is an essential one if the twentieth century holidays of the Jewish People are to have any lasting significance.  Yom Hashoah, Yom Ha’atzmaut, Yom Hazikaron and Yom Yerushalayim are all relatively new and still somewhat inchoate.  At the gut level, one realizes the need to have these commemorative days outlast the generation which personally witnessed the events in question.  Extrapolating from the discussion of Chanukah’s survival we must ask: What are the theological points to be conveyed and what are the practical vehicles by which to do so?

For more on Chanukah, please check out 4Torah.com.

← If you’re going to send hate mail, make it good!
How Much More Isolated Has Israel Become in Just the Past Year? →

10 comments for “Chanukah 2012: The Survival of the Celebration”