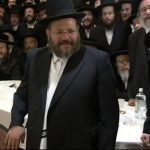 I’ve been back to blogging for a week and my new goal of avoiding Jewish websites, blogs and news outlets almost worked.The Weberman trial, though, is too hard to ignore. If it was a white collar fraud case I would just throw it into the bin of “frum guys caught cheating on their taxes and making a small chillul hashem and convincing the rest of the world that Jews are slimy cheap bastards“, but this is the final nail in the coffin for those who seek to keep cases of abuse and molestation under wraps because they don’t need the rest of the world finding out. Nechemya Weberman is a rabbi and a Satmar, which means two things: he’s got tons of support from the Satmar community and the Satmar Rebbe and this trial is already a big chillul Hashem regardless of who’s guilty or not.

Now I’m fairly certain that 90% of the folks reading this have already jumped to the conclusion that he’s guilty and thinks (on a similar vein to Rubashkin) that the community will bail him out, but as posed on my Facebook wall, isn’t everyone innocent until proven guilty? I’m sure we want to believe that no 17-year-old girl from a frum home would go on trial testifying such nasty things, but what if? Could it be possible that Nechemya Weberman is a victim? I’d love to say probably not, but what if?

In my opinion the trial may actually be good for the Jews. It brings up so many issues that the frum community and leadership have been dancing around for years, like background checks for teachers, sex ed, young boys going to the mikvah, reporting sex abuse to police rather than the very rabbis who seek to protect molestors.

I’ve always viewed most modern day Chassidic sects as cult like anyway, so it doesn’t surprise me that he’s getting all this support, I’m just surprised he hasn’t fled to Israel yet. Then again, if Weberman wasn’t guilty of any wrongdoing, why was the accuser offered bribes and intimidation not to testify?

I would be more willing to give the guy a break (innocent until proven guilty) if it weren’t a kid testifying. I mean, what advantage could a 17-year-old girl have for claiming a Rabbi raped her? What motivation could she have? Will this change how the Chassidic community deals with abuse? Probably not, but for the rest of the community, we may see a good change.

Last but not least I saw this on Eliyahu Fink‘s facebook page today: “Imagine if the frum community treated rape and abuse the way Shimon and Levi did.” – A Victim of Abuse via Email

← Our solution to the unfriendly shul problem.
This ain’t my Judaism: How to deal with cranky old Jews. →