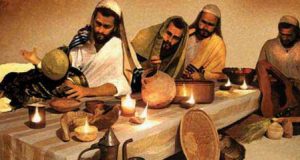 Abraham’s self-imposed mission was to spread the Name of God far and wide. Upon his arrival in the Land of Canaan, he built an altar to God opposite the terebinth of Moreh (Genesis 12:6). He then pitched his tent to the east of Beth-El, built another altar, and called out in the Name of the Lord (Genesis 12:8). After returning home from his brief sojourn in Egypt, he again called out in the Name of the Lord (13:4). Following his separation from Lot, Abraham built his third altar; this one was at Hebron (13:18). While the verbal root kara can have the connotation of quiet or private prayer, in this context it means that Abraham spoke in a loud and public fashion. He familiarized the local citizenry with his conception of the one true God (Bachya 12:8).

According to the Midrash, Abraham began his missionary activity while still in Haran, many years before his journey to the Promised Land. The Bible lists all the people and possessions that Abraham and Sarah took with them on their trek, including “the souls which they had made in Haran (12:5).” Rabbi Elazar ben Zimra noted that man is incapable of manufacturing even animal life, and certainly cannot infuse a human body with a living soul. Only God is capable of such wonders. Therefore, the phrase “the souls which they had made” must refer to the proselytes to monotheism which Abraham and Sarah made through their missionary work (Genesis Rabbah 39). Pseudo-Jonathan similarly renders the verse in similar fashion.

The missionizing aspect of Abraham’s public career heavily influenced the way in which the Midrash and rabbinic commentators understood the tale of Abraham and the three guests who come across his tent. Abraham’s gesture of hospitality is seen as a way to capture the attention of wayfarers and indoctrinate them with correct theology.

In his efforts to have the three men stop at his tent, Abraham offers, “Let now a little water be fetched, and wash your feet, and recline yourselves under the tree (18:4).” Rashi explains that Abraham thought his guests were Arab pagans who worshipped the dust on their feet. Desirous of keeping false gods out of his home, Abraham was insistent that washing should occur before reclining. By contrast, Lot, who was not so careful to distant himself from idolatry, offered his guests the opportunity to recline before washing (19:2).

While Rashi had a favorable view of Abraham’s offer, an embellished version of the story that appears in the Talmud is critical of Abraham. There, the guests angrily accuse Abraham of suspecting them to be dust-worshipping Arabs. They point out to Abraham that he has already sired Ishmael, who will be the progenitor of idolatrous Arab tribes (Bavli BM 86b). This tale reflects the Talmudic dictum, “He who is wrongly suspicious of the righteous is punished with bodily affliction (Bavli Shabbos 97a).”

Kli Yakar was troubled by Rashi’s interpretation. He noted that while some pagans worshipped dust, other pagans worshipped the sun. Yet Abraham did not block the rays of sunlight from entering his abode. Just as sunlight is not rendered forbidden by dint of someone’s idolatrous behavior, neither is dust prohibited because of idolatrous practices. Rather, the verse must be interpreted metaphorically. Abraham wanted these men to repent and remove all flawed religious beliefs from their hearts. The water symbolizes religious purification.

However, a careful reading of the Biblical text (18:2-8) reveals that the story has no religious dimension whatsoever. That layer of meaning has been imposed upon the narrative by expositors and interpreters who approach it with preconceived notions about Abraham. In the text, however, Abraham in fact makes no mention of God, false gods, or any form of religious worship. He offers the comforts of home and a gourmet meal to three strangers – no more and no less.

The lesson to be derived from the story is that kindness extended to any human being, irrespective of his faith, is meritorious. Even if Abraham never engaged his guests in theological discussion, his act of charity and kindness toward them would still have value. The goal of a faith-based benevolent society should be to perform charitable work for its own sake (lishma), and not as a ruse to attract more adherents through subtle (or unsubtle) proselytizing. It is this benign approach that allows a Jewish patient to feel comfortable in a Catholic hospital, and vice versa.

Overt missionizing towards those in need mocks faith. It is likely that, in return for a morsel of food, a starving person will “voluntarily” recite a liturgical formula that he is told by his benefactors is a pre-requisite to his receiving that food. That such a recitation would be insincere to its core is manifest. Abraham certainly wanted his guests to walk away from his home more favorably disposed to Hebrew monotheism. But the best way to instill an appreciation for faith in someone else’s heart is not through mere words. The doing of good deeds, and leading by example, matter more.

The humanitarianism, selfless charity, and kindness of the believer – in a nutshell, behavior that is quintessentially kiddush Hashem — are what impress the non-believer and may, in turn, lead him to embrace faith.

← If not for my wife, I wouldn’t have known of Hurricane Sandy
Do you think the following picture is racist? →