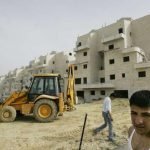 By SHANA HABBAB, Associated Press
WASHINGTON (AP) — UN Intelligence reports what appears to be a coordinated massive construction campaign by Israeli settlers throughout the Occupied Territories.

An unnamed official told Al Jazeera that “as of Thursday night, practically every settler dwelling had undergone an expansion consisting of hastily constructed booth-like edifices.”

In a sharply worded statement, US President Barack Obama declared these provocations to be “detrimental to the peace process” and called on Israel to remove these “obstacles to peace”.

The Israeli Prime Minister’s office issued a brief statement ensuring that all such construction would be dismantled within the next ten days.

U.S. Embassies in the region remain on high alert.

← Using my expert mooching skills for good
How the Obama and Netanyahu Administrations are Getting U.S. & Israel on Same Plan for Iran Nuclear Development →