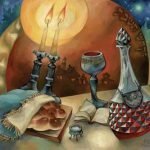 If there’s one thing I’m good at life, it’s getting shabbos meals, break-fast meals, shabbos leftovers, places to sleep in far flung towns and a variety of other freebees given to frum Jews who know how to mooch. I’m not sure that there’s a better term than “mooch”, but most people, especially those of a yeshivish and chabad bent are pretty aware of the plight of singles who don’t want to eat a cold tradition soup by themselves for shabbos. Yes, I have spent lonely shabbosim by myself trying to recall the halacha of making kiddush over crackers, because in my bachelor state of preparedness I had nothing chashuv to make kiddush over and no bread to substitute the lack of chashuvness in the drink department.

Being the expert I am, I know that awkward look on someone’s face when they don’t exactly know how to say they don’t have a place to eat. I also know that no one wants to eat alone and that no one walks 3 miles to shul and wants to go home without a meal invite. My wife and I finally moved into an apartment that resembles a real home, after spending the last bunch of years living in an odd assortment of places including the attic of a shul and an office building, it’s nice to have a place that I can finally host people and give back to society as they say in liberal circles.

Naturally I am clueless about what goes into making a good shabbos meal, I may be on the chef track, but the food is hardly what makes a good shabbos meal. There are so many little things that I have failed to notice in my 15 years of mooching that I’m slightly ashamed to call myself out on. I’m not even talking about the failure of guests to finish the food they take, offer to clean the table or leave in a timely fashion. Oh fine, those are things as well, but now that I’m in control of the meal I think I may need to start a “shabbos meal hosters anonymous” or something, because I’m a little traumatized after hosting my first shabbos meal.

It wasn’t a planned meal, I made challah and a mighty fine short rib and kishke cholent on Friday before going out for a bike ride. Right before shabbos, I realized that I had made enough cholent for ten and had quite a bit of challah as well. The time when I thought of quantity as the crux of shabbos has long past and it dawned on me that we could definitely host some peeps with the warning that all they were getting was challah, cholent and good wine. Let me tell you from personal experience, any meal regardless of its quality is better than eating alone and I guess that’s my logic when inviting people that may be eating alone or not have a meal at all. I have been one of those those stragglers at kiddush trying to get invited without begging, so I know exactly what to look for.

Just like so many women before me, I had to kept reminding the guests that we weren’t having much food and that we had just moved in and so it was a bit messy. In my former single state, I definitely wouldn’t have noticed any sort of mess, but I’m a changed man and having people at your home that you don’t normally drink beer in your underwear with can be a bit daunting. I’m quite sure that these guests were relaxed enough to take off their pants and have a beer together, but this was like 2 days after we moved in.

I’ve never even thought of things that make shabbos meals tick, like flow, course serving and plating. Does the cholent go on the table or do you serve your guests. I absolutely hate Cholent Nazis who deny you that kishke or meat you so rightly deserve, but what if the table is too small? What about kiddush? Do I make kiddush and drink directly from the cup, or do I pour off a bit and drink myself? If I do pour off some for my homies, do I give my wife first after I drink and then give it to them to pass around? What if there’s someone at my table who may worship idols, how do I make sure they don’t worship the wine?

How do I get people to talk if they are the quiet types, everyone knows there’s nothing worse than being stuck at a shabbos table with no conversation. What if you strike up a zemer and no one knows how to sing? What about divrei torah, I don’t know from torah…should I pull a kollel wife and make my guests say a devar torah or sing a zemer for desert? As you can say it gets quite complicated and it could get really awkward. Vegetarians can be a hassle, especially if one of your guests gets into some sort of moral argument about our rights to eat poor defenseless creatures created in Gods image.

Then we have the manner or ending your meal at a timely hour. I’ve wondered if shabbos meals have unwritten rules and regulations in the same way that shidduch dating has them. Unofficially, though more so in recent years, dates have to be at least 3 hours long, what about shabbos meals? In my youth, we made kiddush ate some salad, took off our pants, read the newspaper and then ate the main course and the whole affair took 40 minutes or so. I understand that just hustling people to the table can take that amount of time and then trying to get the women to stop sharing their breastfeeding nightmares while they hold the washing cup in their hands can also be a challenge.

I guess I’ve been so long on the receiving end of the shabbos meal situation that I’ve never observed the slight intracacies that go into making meals. This is not to say that washing dishes, lines and cleaning up before and after the guests is not hard, but those are givens.

Find out more about shabbos meals on 4torah.com

19 comments for “Using my expert mooching skills for good”