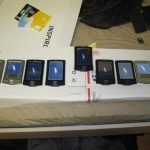 There was a time when I thought such a story would be a hoax, but those days are gone. There has been so much craziness in the chumra and anti-internet world that I’m willing to believe that a Rav would tell a witness he wasn’t kosher because he had internet on his phone. We are i n a brave new world, one in which we are not judged by our good deeds, but on how accessible we are to the internet. Kosher phones vs. iPhones, web chaver vs. filter, internet at home vs. only at work, and so on.

I wonder when the day will come, when random search checkpoints will be set up in major frum areas to make sure the people are following the halacha by not owning a smart phone? (for the record, my phone is so dumb it doesn’t even have a camera). When will all eidim at chupah’s, divorce proceedings, and other Beis Dins be told they are assur for owning a smart phone or having full access to the internet. I fear for the converts who may have had smart phone owners sitting on their beis dins and having some anti-smart phone chumra nut question their geirus in the future.

The following is a list of other reasons to pasul a witness:

Grandmother didn’t cover her hair or live in the shtetl

Siblings off the derech

Davens in a shul that says the Israel prayer

← What’s the deal with over usage of the term desperate in shidduchim?
How much should one hide when it comes to shidduch dating? →