I’m not quite sure how I feel about chabad marketing chassidus as kabbalah and throwing around the “kabbalistic sources” thing to attract a more new age audience, but I can tell you that the whole Kabbalah new age thing is kind of whack. I guess those keywords like mysticism, deep, secrets and existential  reminded me of the rich yoga/pilates moms who had always wanted to feel some sort of “connection”. I have never heard anyone call Madonna – Esther and I have never met anyone non-religious who has told they “learn” Kabbalah… 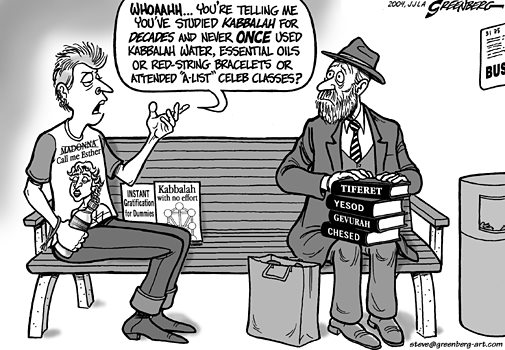 Now of course the flip side to this is “what’s the big deal? so what? someone who’s not interested in the dry aspects of regular Judaism wants to delve into the secret in between stuff…why should we care?” Do we care? I’m not sure I’ve written much on the subject of Kabbalah, but the cartoon above made me start thinking about the back and forth between the strict letter of the law of Orthodoxy and the Carlebachian/Neo Chassidic or even more traditional Chassidic way of connecting to God, self, and practicing Judaism. We can all pretty much acknowledge that Judaism is not a one size fits all, and as long as someone stays within the framework of halacha they are cool, right?

It would seem that prior to nowadays, in social Orthodoxy it would have been acceptable to practice Judaism any way you saw fit as long as you remained within the bounds of halacha, but I think it’s actually become the opposite. In the days of yore it seemed that you practiced how your community practiced and you rarely ventured out of your community. These days it’s changing. There is a lot of cross culture exchange within Judaism and not just among the less religious sects. I have been told that by old timers that the amount of exchange between the Chassidic and Misnaged communities that goes on today could not have been imagined even 50 years ago.

I know that many of the folks looking into Kabbalah are doing it for the wrong reasons. Many of those folks may not even be Jewish, but then it’s a curiosity just like that of Buddhism for many Jews who want to explore beyond their own philosophies. It’s kind of like women who want to learn Gemara: could there really be a bad reason for someone wanting to learn Gemara to grow in their Judaic knowledge and to help them become more connected or closer to God? Are a bunch of feminists learning the laws of lending or niddah going to be such a threat to traditional Judaism? I know that some folks in the gemara felt that women learning Torah Sh’bal Peh could lead to immoral sexual acts, but the gemara said a lot of things that turned out to be false.

← Why on earth does shabbos davening take 3 hours?
What’s the deal with over usage of the term desperate in shidduchim? →