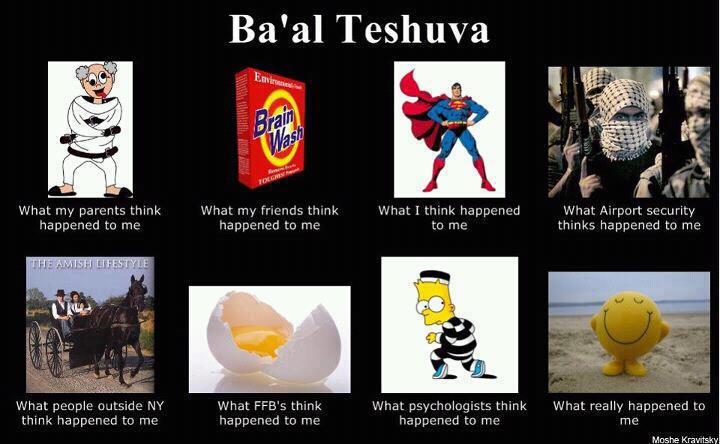 This meme, one of the first I’ve posted is very true. In general, the Jewish community at large thinks varying things of Baal Teshuva. In yeshiva we thought them to be a bit off their rocker “if they became frum, it means something was missing” is how people in the yeshiva world view BT’s – which is funny because kiruv is the hottest yeshiva industry, behind getting your BTL and finding the back door way into law school. Non-frum folks think BT’s are absolutely insane and wonder why they couldn’t have slowed the indoctrination process just a tad. Parents usually duke it out and then once in a rare while you hear about the kid who made the parents frum. Feminists think any BT has joined a cult (which in most cases is true) and those off the derech folks will try everythinbg in their power to do “kiruv” to those in the throes of “I had the most beautiful shabbos in the world, time to throw my college education away and become a welfare recipient  mode.

What do you really think of BT’s?

Find out more about BT’s on 4torah.com

74 comments for “What people really think of Baal Teshuvas”