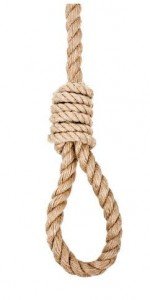 This week’s parsha opens with perhaps the most famous trifecta of storylines — the captive woman, the two wives and the wayward son (Deuteronomy 21:10) — that, according to the teachings of the Akivan school of thought, tie into one another as a sort of portentous play-by-play of things to come should one choose a path of wickedness.  But we won’t be talking about that today.

Instead, I’d like to focus on something rarely ever discussed in contemporary circles of Orthodox Judaism.  Specifically, I’d like to speak about a particularly curious comment that Rashi makes in reference to the events to follow capital punishment meted out by a Jewish religious court.  For those who were subjected to death by stoning, the corpses of the convicted were to then be hanged following the stoning (Deuteronomy 21:22), but were not to be left hanging overnight “ki k’lilas elokim talui” — “for a hanging corpse is an affront to God.” (Deuteronomy 21:23)

Rashi explains this as a denigration to God “she’adam asui b’dmus d’yokano” — “for man is fashioned in His image.”  And what does that mean, you might ask?  Rashi persists with a parable of talmudic origin (Bavli Sanhedrin 46b) in the name of R’ Meir (a disciple of R’ Akiva): identical twin brothers whose lives took very different paths, one becoming king and the other apprehended as a thief.  After the thief had been executed, passersby saw him hanging and, confused by the resemblance, exclaimed in astonishment that the king had been hanged!  To avoid such confusion, a corpse is not to be left for too long but is to be buried on the day of death, and this commandment is extended to include all corpses, including those who died in ways other than receiving a death sentence by the court.

A quick look at the Minchas Chinuch (a work detailing the biblical commandments) reveals two points of interest when discussing the limits of the directive to unhang corpses before nightfall and bury the dead quickly (the latter, another commandment tied to the first).  The first is about a portion of a corpse, and the ruling is that even a k’zayis (a portion the volume of an olive) requires burial and perhaps even less than that as well.  Certainly, a piece of a human lung or liver parenchyma the size of an olive is indiscernible as being from a human as a standalone, and unless one knows that it’s of human origin, it simply cannot serve as an affront to God for passersby (as in Rashi’s parable).  But, then again, if no one knows it’s of human origin, no one will attempt to apply the rules of a rapid burial, and so it’s largely a self-generated cycle.  I suppose, though, that this commandment has its basis in the Torah’s subtle yet oft-posited position that humans, unlike other life forms, are to be placed on a pedestal and thus, as a directive in Torah-based psychology, even an olive’s bulk of human remains retains the biblical mandate of burial to highlight its former contribution to the human being to which it once belonged.

The second point is a bit more edgy, and that is to whom this ruling applies.  The Minchas Chinuch queries whether this rule would apply to a gentile descendant of Noah, for it was under the jurisdiction of the Jewish courts (when they existed) to try and convict gentiles in violation of the Noahide laws, and even though there is considerable dispute as to the appropriate manner of death imposed on gentile transgressors (with Maimonides seemingly maintaining that stoning was reserved for gentile males transgressing the violation of sexual immorality with a married or betrothed Jewish female, but Nachmonides disagreeing), the Minchas Chinuch wonders if the commandment of lo salin (“do not allow the executed to hang overnight”) applies to gentiles.

If the rationale for the prohibition of allowing a corpse to remain on the gallows overnight is because it amounts to an affront to God because man is fashioned in His image, how does the religious affiliation of the person who previously inhabited the now lifeless body enter into it?  Perhaps the comparison drawn by Rashi is inaccurate because of its emphasis on the physical resemblance between the king and his thieving twin brother, when really the idea behind the reference of “man is fashioned in His image” is more of a spiritual thing.  Nachmonides, however, is quoted in opposition to this hava amina (initial and ultimately rejected suggestion) as stating that gentiles are, in fact, included in this prohibition (and are thus similarly held as fashioned in the image of God), and he quotes the incidents of Joshua having ordered that the Canaanite king of Ai (Joshua 8:29) and the five Emorite kings (Joshua 10:26-27) be hanged only until evening, at which time he ordered the corpses removed and covered over with stones.

A question of extreme significance arises from this discussion: what is meant by the idea that man is fashioned in the image of God?  The talmudic parable is one thing, especially when it deals with aggada (even though it can be said to serve as a hinge for halachic practice), but there is a biblical verse that states “b’tzelem elokim barah oso” — “man was created in the image of God.” (Genesis 1:27)  How does this jibe with Maimonides’ 3rd principle that God is incorporeal without image or form?  Or, perhaps more accurately, how does Maimonides 3rd principle jibe with the Torah?

I would recommend Marc Shapiro’s The Limits of Orthodox Theology as a must read for anyone who takes Orthodoxy seriously, and in it, he so very clearly expounds on each of Maimonides’ 13 principles, focusing particular attention on those scholars of great import who have argued with and disputed the validity of their assertions.

I believe with complete faith that the Creator, blessed be His name, is not physical and is not affected by physical phenomena and that there is no comparison whatsoever to Him.

The notes at the bottom of the ArtScroll Siddur (prayer book), presenting a very sanitized version of what the editors claim to be normative Orthodoxy, state that these principles of faith have “achieved virtually universal acceptance.”  Now, while that may be the case in respect to the 3rd principle, it’s most certainly not the case relative to quite a number of the other principles, and I urge the reader to read Shapiro’s book for more on that.

Maimonides (1135-1204) famously takes rationalist approach that all anthropomorphic descriptions of God are to be understood figuratively, so that when  verses refer to the  hand (Exodus 3:20), arm (Exodus 6:6), finger (Exodus 31:18), back and face (Exodus 33:23) of the Almighty, they are to be understood metaphorically and metaphysically, but most certainly not literally.  So, too, can God not be understood to exhibit the passions that drive man, such as anger (Exodus 4:14) or jealousy (Exodus 20:4), and reference to God being a man (Exodus 15:3) is but candid poetry.

What’s surprising, though, is that Maimonides admits that there were scholars who, even in biblical times, took a literal, anthropomorphic view of these and similar verses — are they to all be deemed heretics?  Shapiro cites what appears to be very compelling evidence that both Rashi (1040-1105) as well as Rashbam (Rashi’s grandson, 1085-1174) held corporealist views of God.

On the early verses of Genesis (1:26-27, cited above) Rashi states that the word tzelem (“image”) in the verse is to be understood as d’fus (“form”), while the term d’mus (“likeness”) is to be understoof as a reference to man’s capacity “l’havin u’l’haskil” — “to understand and be intellectually creative,” something unattained even among those members of the animal kingdom we consider to exhibit the highest order of brain function.  And as if one might come to misunderstand his commentary, explains Shapiro, Rashi’s comments on verse 27 reiterate: “this teaches you that the form that was established for man is the form of the image of his Creator.”  The 3rd grade rebbes and morahs are specifically trained in Rebbe & Morah School to skip this second comment of Rashi.  Further eivdence arises from Rashi comments on God’s message to Moses regarding Pharaoh.  When God says, “then I will display My hand against Egypt” (Exodus 7:4), Rashi write that “es yadi” (“My hand”) is to be understood as “yad mamesh” — “literally the hand.”

With a conclusion like this, where do we go from here?  Perhaps the 13 Principles of Maimonides are not meant to actually be the framework of Judaism, but only the framework upon which Judaism is built — a means to an end.  After it’s built, though, the scaffolding necessary to have accomplished the task might be looked at as something less than absolutely clear and true.

For more on Rashi and Maimonides, please visit 4Torah.com.

17 comments for “Dvar Torah Ki Seitzei: Hanging Out with God”