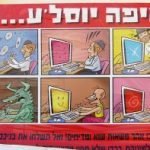 Slate has another article in their unofficial series on orthodox Judaism and specifically on chasidic Judaism. In this article, the Internet is presented as a supreme danger to Hasidism.

On this issue, the secular media and the leadership of the chasidic groups agree. The Internet is a Pandora’s Box for a chasidic Jew. There is no way around it. The article does an effective job of explaining why the Internet poses such a hazard to chasidic Judaism. I don’t think an honest chasid would disagree with their assessment.

The question then becomes what to do about it.

There are basically three choices that the chasidic community faces. 1) Redouble efforts to protect the community from the Internet. 2) Carry on as is. 3) Adjust their doctrines so that they are less susceptible to the harms of the Internet.

I don’t think Option 1 can possibly work. The Internet is ubiquitous. The only way it could work is to literally kick anyone with Internet access out of the community. I doubt that this can be done.

I don’t think Option 2 is viable either. The truth is that more and more chasidic people are disenchanted with the chasidic lifestyle. I don’t believe it is a greater percentage of chasidic Jews that are disenchanted, rather with the ever increasing size of their communities, there are simply more people who are going to leave. It’s a numbers game. If the defectors reach greater proportions, I do believe the community will find it necessary to address the problem vis a vis the Internet. They will either choose Option 1 or Option 3.

And so we arrive at Option 3. The article mentions that many chasids find the information on the Internet incompatible with the chasidic life. To a large extent this is true. But are those things that they find incompatible vital or integral to chasidic or orthodox Jewish life?

Is mocking evolution and science a necessary component of chasidic life? Is family planning a direct contradiction to chasidic life? Does chasidic life require that the non-chasid be stigmatized and delegitimized?

On these issues, the Internet is bound to “win” against tradition. There is just too much compelling information out there to even hope that tradition can stave off the attacks from the Internet. But these are not necessary beliefs to Judaism, rather ultra-orthodox, ultra-insular Judaism has adopted these as new tenets of belief. But these tenets are doomed to be forsaken by the Internet generation. They are just too flimsy to survive under scrutiny.

When one is told that the sky is green and the grass is blue, it doesn’t take much to realize that is a lie and the person who told the lie is a liar. Liars don’t make for good educators and leaders. Tradition cannot be passed down with lies.

The other issue that the article raises is that the chasidic community has some built in “protections” that don’t squarely address the Internet, but they do make it harder to leave. Those are the early age of marriage and child bearing as well as the dearth of secular education.

This means that even if a chasid finds things that make a chasid want to leave the community, it’s really hard to leave. If one already has a family, and one already has a life on the inside, it can seem impossible to make a life on the outside. Especially if English is a second or third language and one does not even have a high school education. There are also the the benefits of staying in the chasidic community. If people want to stay, but cannot handle the beliefs of the community, you have a sticky situation.

UPDATE: The answer to my question posed in the headline is – YES! Judaism can survive the Internet. I am not so sure Chasidism can.

← Proof that the Internet Asifa worked
5 years ago I was an atheist, then I was brainwashed by chabad! →

44 comments for “Can Judaism survive the Internet?”