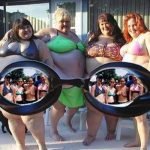 If this was a few years ago I would have taken it as a joke, but after some Charedim spit on little girls going to school in Beit Shemesh and began calling women who sat on the front of buses whores I’m willing to believe the madness. Apparently the blurry glasses in mention don’t allow men to men to see more than 3 meters in front of them, not enough to really work since beyond three meters it’s hard to tell if she’s a butter-face or not anyway. Regardless, the glasses are patented and being sold for 25 shekels a piece.

Let us consider the gravity of this event, we all know that women are assur to look at, but is it necessary to spend our hard earned welfare money on something we don’t need. It’s the klal’s mesorah to simply look down when walking in reshus harabim, furthermore – walking with your eyes straight ahead can lead to gaiyva and the need to kavod. Personally I think that it’s better to hide our obsession with controlling our animal lusts for pritzus, you don’t see the community coming up with stupid ways to protect us against  pedophilia, sex abuse and white collar fraud – because publicizing it makes us look bad, why do we have to show the whole world our ways of dealing with immorality.

These blurry glasses are merely another way for the non-frum world to poke fun at us. They don’t understand our ways, but for some reason making fun of Charedim and Yiddishkeit is ok, yet you make one peep about the gays and you have a national scandal.

Instead of marketing blurry glasses, the Charedim should wise-up and just ban women already. I know we n eed women to do laundry, work, have babies and cook, but that doesn’t mean they need to leave the house. It seems that the Charedim in Israel are just pussy footing around, they should have hours for women to leave the home and those hours could be in the middle of the day when any truly frum man who fears pritzus enough to put his life in danger by wearing fuzzy glasses would be learning Torah anyway.

Although I would argue that the pritzus crisis is far worse than the shidduch crisis and the yeshiva tuition crisis, I think the charedim need more creative ways to deal with this crisis of epic proportions. It should be noted that men shouldn’t have to suffer because of women’s misdeeds, since when is it our fault that Hashem created us on a lower spiritual level than women.

Find more about the pritzus crisis on 4torah.com