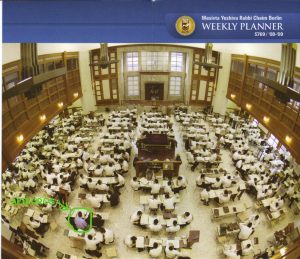 Upon finishing shemona esrei I saw something that I haven’t seen in a long time. There was a fellow with his hat pushed back high in his head, doing the full on fist pump shuckel. It appeared that he was trying to lift some invisible table or bar up into the air very quickly, his hands were clenched and every few moments he had this constipated grimace look on his face. From the corner of my eye I saw another interesting sight, someone was doing the kedusha shuckel in which they shuckel normally and every 5 sways they bump onto their toes on the way back. I looked past these two fellows and noticed that there was a sea of black and white – something I haven’t seen much of in my 3 year stint in the Bay Area. Not only was a majority of the shul wearing black hats, but based on their distinctively non-Harry ways it appeared that I was amongst a room full of FFB’s. Usually I’m the only FFB at the table, but here I was amidst a bunch of yeshivish folks and I instantly felt New York creeping back into me.

Maybe there was another shul somewhere else that all these frummies went to in the day time. I mean, it’s perfectly acceptable in the frum world to daven at the shul closest to your house on Friday night, even if it’s modern. Shabbos day is not the case, generally the frum community holds that your shabbos day shul should be your shul, but Friday night could be anywhere – usually in the ezras nashim of the local Young Israel as I have witnessed many a time in Far Rockaway and Brooklyn. Was it possible that there was another really frum shul farther away and all the frummies merely used this closer more modern shul as their Friday night quickie?

I saw several folks with peyos behind their ears, I also sw what may possibly be the gayest yeshiva guy in the world. He spent a good portion of the davening checking himself out in the window and constantly tugging on his shirt to make sure it looked perfect with his enormous belt buckle. The guy in front of me had enormous sideburns and one of those yeshivish tie knots in which you make it huge and then hang it low with the top button undone.

I counted over a dozen hats in shul and you can add about half dozen black velvet types that could go hat or not hat. I should mention that at least two of the hat wearers seemed to be baalei teshuva, this is purely skeptical, but those two people weren’t Harry’s they just didn’t have the look and finesse of a seasoned yeshiva guy.

Most of the folks at the meal were visiting California on road trips, always a painful subject for me because most people end up wasting their time doing stupid stuff and missing all the cool stuff. At one point someone was talking about Seals and this very yeshivish girl says “oh you mean those fishy things.” Then there was some igros moshe talk and then this fellow across from me started telling me that he didn’t see that many gays in San Francisco, he said that in NY he sees them all the time. I tried to explain to him that it wasn’t like they were just holding hands and making out with other dudes all the time.

I played pretty successful Jewish Geography and talked about the downfall of Woodbourne and how it’s dead lately. That got us into a conversation about how back in the day going off the derech meant you smoked cigarettes with girls and watched movies in bein hazmanim. The OTD crowd is on a different madreiga nowadays. There was even one of those classic yeshivish moments where someone says “wow this food is so delicious” and suddenly everyone decides to pipe in about this. The food was very good, but I rememberthis mussar schmooze about how you should always say how delicious the food was.

There was also a “know it all Jew” at the table, a hocker/blue tooth douche in the making. No matter what you say or talk about, he knows more about it than you do and he knows someone who’s better than you. I wanted to smack him, but I chose to ignore him.

Find out more about yeshivish people on 4torah.com