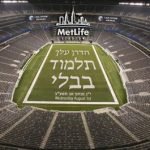 The Twelfth Siyum HaShas was the most incredible event I have ever had the privilege of attending. The Siyum was almost perfect and I am considered a critic.

All kinds of orthodox Jews were there. Some were dressed in chasidic garb, others in yeshivish garb, many in professional attire, some in casual wear, others in business casual styles. Every kind of hat and yarmulka was represented. I saw them all with my own eyes. At one point everyone in the stadium was dancing and you could see circles of as diverse a group of orthodox Jews one could find. Truly, the Torah is the great equalizer and celebrating a Siyum HaShas brought (almost) all of us together.

Agudath Israel of America put on a spectacular show and I was greatly impressed by their production. The Siyum was as professional event I have ever attended. The speakers mostly spoke beautifully. The video tributes were slick and very well done. The music was excellent. The programs were lovely. The overall attitude and atmosphere of the Siyum was positive and filled with joy.

That is the way it is done. Wow.

I want to mention a few particular specifics that made an impact on me.

First, the wow moment. I, like so many others, arrived late. But it was to my benefit that I arrived late. The stadium was probably 95% full when I got there and when I emerged from the tunnel to the stands, the experience of popping my head into a stadium filled to the brim with my brothers and sisters took my breath away. It was awe-inspiring. That moment brought tears to my eyes. That was before I heard a single word of Torah or a single bar of music.

Second, the primary speakers were outstanding. Rabbi Frand took the house down. He spoke eloquently, powerfully, and passionately. His message was that the Daf has a special power to urge us to do more and try harder in our Avodas Hashem. He ended with a great line: “Beyond your reach is within your grasp”. We can do more than we think we can do and the Daf pushes us in the right way. I was proud to share yeshiva allegiances with Rabbi Frand. It was a great moment for Ner Israel.

The surprise of the night for me was Rav Scheiner. I had very little prior experience with Rav Scheiner. Apparently he and my grandfather were best friends in yeshiva and he learned under my great-great grandfather from the other side, Reb Elya Lopian. Anyway, Rav Scheiner was masterful. He is a gadol from Israel but was born in American. His English was perfect (yes, he spoke in English) and his messages were timeless. He took every possible opportunity to heap praise on Rabbi Frand. It was very impressive to see a 90 year old Gadol HaDor shower Rabbi Frand with so many effusive compliments. His charisma and charm burst through his words. His genuine care and love for others was able to be felt as he spoke. His main point was that we should all try to commit to starting the Daf and that we should strengthen ourselves in unity and also learn the laws of forbidden speech to promote good will and harmony in Klal Yisrael. He was great. I hope we hear more from him in the future. A lot more.

Rabbi Lau was as good as expected. One can only imagine the emotion that he must feel at events like these. Here is a man who survived the death camps at the age of eight years old. He probably never thought he would survive and certainly I cannot imagine he dreamed he would ever speak before nearly 100,000 people in a football stadium celebrating seven and half years of dedicated Talmud study for the twelfth time. But that is exactly what happened and Rabbi Lau, in his inimitable style, conveyed that message along with many others.

Third, the video presentations were so politically correct, inclusive, and diverse. They were each very professionally produced and they did not feel amateur at all. These were super high quality videos. The attention to detail, their moments, and their universality were really very appreciated. The two gentlemen who proclaimed that they had finished Shas 5 and 6 times in the tribute to the teachers of the Daf were both from the modern Orthodox community. This willingness to step outside the yeshivaworld box made the videos even better than they would have been if they were more monolithic.

First, I want to compare the Siyum to the Asifa. It is so much more inspirational when one stands for something as opposed to standing against something. The Siyum stands for Torah and for unity. The Asifa stood against the Internet. The impact of the Siyum, which did not ban or prohibit anything, was in my opinion several times more than the positive impact of the Asifa. You catch more flies with honey than you do with vinegar. The speakers spoke with smiles on their faces. The atmosphere was so positive and so optimistic that I have to believe the Siyum was very inspirational for many people. Part of the reason for that was the good attitude and pleasant spirit of the event.

This point could be demonstrated by comparing two statements. At the Asifa, “R’ Wachsman said that since all of Klal Yisrael is gathering together for an event, notwithstanding the fact that only a small sliver of the Jewish population was present at the Asifa, whatever edicts were initiated at the event would be binding on all Jews and if someone was not present at the Asifa, they were bound as well. Anyone who would not listen to the edicts was to be considered a defector and would lose their portion in the next world.” (The Asifa is Done: I Was Fooled)

At the Siyum, Rav Scheiner said we should take the inspiration of the evening and as Rabbi Frand suggested, we make a plan. Rav Scheiner’s suggested plan for us was that we should all try to learn a daf a day and join the Daf Yomi movement and study the writings of the Chofetz Chaim. But he emphasized several times that we should say “Bli Neder”. We shouldn’t obligate ourselves with a promise, we should just try our best.

Do you see the difference? I do. It’s a big difference.

Second, I want to talk about Agudah. The Siyum HaShas is an Agudah production. I cannot tell you how incredibly the Siyum was produced. There were very modern multimedia presentations, there was music, there were intellectually stimulating speeches, there was very little “mussar”, and zero negative energy. The Siyum used the past for perspective but focused mostly on the future. There seemed to be a concerted effort to use technology and present orthodox Judaism as modern and appealing. I give Agudah all the credit in the world for creating such a wonderful Siyum atmosphere.

But then I think of the Agudah Convention and I can’t help but think that it is almost impossible to believe that the two events are run by the same organization! At the conventions, orthodoxy is very narrow and the focus is on tradition and the past.  The Agudah Conventions do not resemble the Siyum at all! In fact the Siyum was so good that it might even outweigh the 7 years of Agudah Conventions between Siyums.

So there are two options here. Either Agudah will use this Siyum as a foundation for the future. They will embrace modernity to a certain degree and present a contemporary version of traditional orthodoxy and the convention will being to resemble the Siyum in attitude and production. Or the Siyum was an anomaly and the convention will be the same ol’, same ol’. I really, really hope it is the former. I want Agudah to be successful. I want Agudah to be relevant. I want Agudah to be the somewhat progressive, but traditionally orthodox organization it was when my grandfather was involved in the Agudah in the 50?s and 60?s. The Siyum style Agudah can be that organization. Hopefully, they will be that organization in the future.

The Siyum was absolutely amazing. I know I am inspired after being there. I know my son had a very special experience at the Siyum as well. I could not have asked for a better Siyum experience. Thank you Agudath Isreal of America. Next time I hope to be making a Siyum along with the rest of the Daf Yomi learners. And I hope you will too.