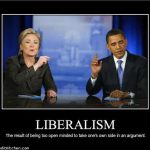 Huge fan here and I have a question that’s been bothering me ever since I started reading your blog. I’m sure that if anyone can answer the following question you can. I’ve noticed that Orthodox Jews tend to be very right wing politically, while the more liberal streams of Judaism tend to be liberal. I always figured that if Orthodox Jews were upholding the Torah which preaches peace and tolerance, then they would be more liberal than their fellow Jews who are not necessarily Torah based. Why don’t you ever speak of the Jewish requirement of tikun olam or social justice for that matter. If one were to merely read anything put out by any of the major orthodox groups it wreaks of intolerance and I know the Torah can’t preaching such things, can it?

I have no idea how the Torah was hijacked by the liberals, but let me set something straight here, Judaism is not compatible with Liberalism. Judaism demands that you adhere to the entire religion, not just one facet that may preach some sort of peace or tikkun olam. Besides, in general, Tikkun Olam could also mean some pretty nasty times for those who go against the words of Hashem. Remember Pinchas from a couple weeks ago, that fellow was doing some hardcore tikkun olam and I bet you those Libs would be calling up the ACLU if that happened in modern times.

What about all those Jews who feel it better to take care of the goyim rather than the Jews, there are parents who cannot afford yeshiva tuition and these phonies care about some random third world folks in Africa. Why the F are you people walking with folks who have Aids, any Torah observant Jew worth his weight in kishke knows that Aids is a kapara for being gay. Supporting the gays, forcing ethics upon kasharus, treating women equally, supporting goyishe organizations that are assur and a whole slew of other regular liberal Jewish activities that are done in the name of Tikkun Olam are actually the opposite. Why don’t they try putting on tefillin, dressing tzniusly, giving tzedaka to Yidden and eating kosher before doing things which are clearly against the Torah?

It boggles my mind how left wing Jews can have the chutzpah to equate their apikorsusdike activities with Torah, I have no idea when going to shul on shabbos became better than keeping shabbos, but that’s what happened when the Conservative movement decided that suburbia gave a heter to drive on shabbos – only to shul of course. Do any of these Tikkun Olam commies even keep the sheva mitzvos? I think not, I think we have a bunch of intermarried Jewish wannabes running around thinking that they can pick and choose what they want and call it Judaism.

I hope that cleared some things up, basically I could have summed it up with telling you about Torah being an all encompassing way of life that doesn’t meet standard liberal ideals. We vote right wing because the right believes in morals and the left believes in a free for all. Left wingers tend to lead empty lives that they need to fill with falsehoods, while orthodox and right wing folks are working towards a greater good that aligns with God.

← Jewish Pluralism Means Orthodoxy Too
Mindy Meyer is an idiot →

34 comments for “Tikkun Olam is not Jewish Value”