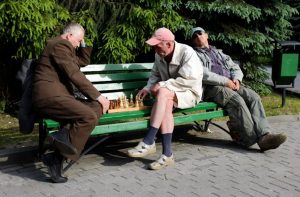 Because Torah is meant to engender a sense of profound joy and utter fulfillment in our lives, our sages prohibited the study of Torah on Tisha B’Av, based on the verse in Psalms:

Notwithstanding this, however, there are a number of sections of the Torah which are permitted for study because of their focus on either matters that are m’atzivim es libo — “saddening to the heart” — either because they relate to prophecies of punishment or the destruction of the Holy Temple(s) in Jerusalem. (KS”A 124:5)  Because of the limited scope of permitted text for study purposes, they have become somewhat distinguished and well known — perhaps the most well known being the story of Kamtza and Bar Kamtza.

In fact, the story of Kamtza and Bar Kamtza is so well-known in some circles that some of you might think to stop reading right here.  Therefore, I will wrap the summary of the story in lines of asterisks so that anyone who feels they already know what there is to say about it can skip right to my point.

Brought down in the Talmud (Bavli Gittin 55b, 6 lines from the bottom), the story goes as follows:

There was a man who was making a large party and he sent his servant to invite his dear friend, Kamtza, to this party.  However, the servant mixed it up and instead invited his master’s sworn enemy, Bar Kamtza.  When the host sees that none other than Bar Kamtza is sitting at his party, he asks him to leave.  Slightly embarrassed, Bar Kamtza asks to be allowed to stay and offers to pay for the food and drink he consumes.  Unhappy with the offer, the host insists that he leave.  Somewhat desperate, Bar Kamtza offers to pay for half of the entire party in exchange for not being allowed to save face, but the host still refuses.  Finally, even after offering to pay for the entire cost of the party to avoid the degradation of being asked to leave the party, the host rebuffs Bar Kamtza and has his ejected.  Because the sages of the time were present at the party and did not step forward to prevent this public humiliation, Bar Kamtza took their silence to indicate their agreement with how he was treated and went on to inform on the Jewish community to the Roman government, ultimately leading, as the Talmud attests to, the destruction of the Second Temple for which we still mourn.

The Maharal asks why the Talmud refers to this as the story of both Kamtza and Bar Kamtza.  Rather, it should be called the “Story of Bar Kamtza,” or perhaps the Story of Bar Kamtza and the Host of the Party” — for Kamtza never appears in the tale.  The unnamed host sends for him, but his servant invites the wrong guy.  Presumably, Kamtza never even found out that there was a party until he saw his name mentioned in the gemarah!

The Maharal answers that the problem here was not only that the host harbored an unsubstantiated hatred for Bar Kamtza that was so significant that he had him removed from the party rather than be compensated for the entire cost, but that he had such an exclusive friendship with Kamtza that others, such as Bar Kamtza, were made to feel unwelcome — so much so that the friendship with Kamtza itself was a violation of the prohibition of sinas chinam, baseless animosity.

In Pirkei Avos (1:6), we receive the following guidance:

I once heard the following from R’ Becher: “What is the meaning of the juxtaposition between these directives that they are mentioned in succession as though they flow from one to the next?”

“Well,” explains R’ Becher, “it seems to be that the first clause enjoins us to procure a teacher to guide us in areas of religion, spirituality and midos (character improvement).  After that, the numerous followers of the one chosen as teacher will band together and form a cohesive unit, faithful to one another in their newfound fellowship.  However, this tight attraction will inevitably lead to strict exclusivity, for certainly, they will each be quick to proclaim to outsiders, ‘Our rebbe is greater than your rebbe,’ and ‘Our yeshiva is greater than your yeshiva.’  Therefore, the mishna implores us to immediately take it to heart that even when uniting to form this group led by our chosen leader, it is incumbent upon us to maintain civility and brotherly love to those who are not part of our innermost circles.”

And even though the most difficult part of Tisha B’Av might be relating to the destruction of the Holy Temples in Jerusalem — for who really even knows what they were or what they meant; we are all, more or less, living quite comfortably in New York or Los Angeles or in between, or somewhere else like Melbourne or Toronto or Cape Town — isn’t it marvelous in the most terrible sort of way that we can all relate to this age old problem like these messages were texted to us just yesterday.

Black hatters mock those who don’t wear hats and even the hats of those who do are not black enough, and the vitriol is truly a two-way street.  Some girl runs for office and whether she’s a flake or a half-wit or both or neither, all most people have to say is, “hahaha…look at this clown!” — destructive criticism at its finest.

Let us all enter Tisha B’Av with a newfound respect for our fellow human beings and even if we find it difficult to cry for the destruction of that which we never experienced and only read and heard about, I think we can all say that the message rings true today, even in 2012.

Some things just never change…but perhaps that’s exactly what we are meant to consider when we recite “l’shana haba’ah b’yerushalayim!” — that we look forward to change, even though we never achieve it, because change is a journey, not a destination.

← Meet Mindy Meyer, the 22-Year-Old Orthodox Jewish Woman Running for New York State Senate With Elle Woods As Her Role Model, and Pink as Her Color
Do you get sad on Tisha B’av? →