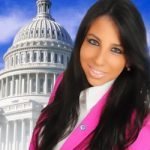 Just received this from one of my very frum fans/critics who may or may not be serious.

Over a dozen people have asked me to write about Mindy Meyer and I refrained because I felt my opinions may offend some people who were all jumping on the Mindy bandwagon. Am I the only one who thinks that letting a supposedly frum girl run for political office is a bad idea. If she was wearing pants and showing her elbows it would be one thing, but due to the fact that she dresses frum it definitely sends the wrong message of frum girls out there. It says that postponing marriage isn’t just for modernishe girls anymore and Mindy Meyer threatens the entire frum way of life with her cute little political campaign.

Just because Mindy Meyer couldn’t find a husband, doesn’t mean she has to flaunt her shidduch crisis status to the world. She should grieve alone and not in the public eye. This is not even bringing up the fact that her terribly untznius website is pure chillul Hashem. Already she has set the tone for a pink theme which in itself would make any Charedi mob want to burn their neighborhood down, but what irks me the most is her blatant violation of hilchos yichud in pictures circulating about the internet. One picture even shows her with multiple men and no women in sight.

As yidden we need to look at our own issues before going outside the community. If Mindy were modern orthodox and lived on the upper west side this wouldn’t be an issue, but she’s prancing around in black like a frum girl and she even has the frum girl slouch, but the pink on her website and the fact that newspapers will now publish pictures of her – just makes me want to say tehillim for her poor soul.

Find out more about Mindy Meyer on 4torah.com

← Facebook is boring when you’re not trying to get some
Do you mock other religions for believing in crazy things? →

80 comments for “Is Mindy Meyer making a chillul Hashem?”