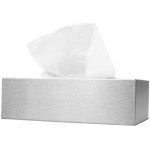 Tissue boxes are almost like the yeshiva guys version of the Swiss Army Knife. Not only are tissues used as book marks, nose picking devices, bugger receptacles and notepads, but the boxes themselves were also used as many things. Typically, our yeshiva had these cheap white boxes with lightly colored mountains on them. Once the box was empty it typically became the lazy bochur’s dirty tissue garbage can. Then someone would come along and tear off pieces of the box to use as a toothpick, notepad and bookmark. You tended to find half torn apart tissue boxes with dirty tissues all around the beis medrish.

12 comments for “Yeshiva memories: The brilliant use of tissue boxes”