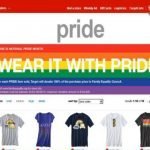 It’s generally known that frum Jews are quite right wing politically, yet they rarely speak up with their wallets. Rare is it that we really get into the hearts of the matter by boycotting or speaking out against companies that don’t support our Torah way of life. Target is one such company, I know that in the Wal Mart vs. Target argument the true frummy will always favor Wal Mart, but that doesn’t mean that frum folks don’t patronize Target and Target is a big supporter of Gays and their supposed right to marry.In Israel the truly pious would threaten to boycott and then have a riot and burn down half the city, yet those same pious Jews spoiled by the riches of America probably wouldn’t go much further than yelling about it over herring at that weeks kiddush club. What’s a truly pious Yid to do?

I would like to compare the question above to the fact that smoking has never been officially banned by any gadol worth his weight in useless chumras. This is because banning smoking would mean that all those gedolim and pious Jews before us who smoked were wrong and this goes against the mesorah that each generation knows less than the last. Banning smoking could introduce more complication into the shidduch system because it creates one more way that nosy yentas could intervene into someone’s lives based on what their ancestors did. Same is true with boycotting companies like Target who are leading people down the path of immorality.

You see, once you boycott Target, a fine purveyor of fancier Wal Mart-esque items, you have to look into every company which supports the gay agenda o any other immoral anti-Torah ways. It’s like that somewhat popular commercial to educate those who want to boycott Israel, the commercial shows peoples cell phones, medicine and computers disappear because they all use Israeli parts – same to the frum American household

Imagine for a second that frum Jews started boycotting any company which supported gays, there goes half the fashion and technology industry right there. Google would be out and so would pretty much every liberal communist anti-Capitalist company in Silicon Valley. That’s without even approaching the topic of anti-Israel sentiment. This is why frum Jews merely have a loose minhag of not using German products, which is slowly dying with the previous frummer generation. My family doesn’t drive German cars, but I use their knives.

Now I wonder if those lefties from Tav Hayosher would boycott companies which are against Torah, or are they just against companies which don’t adhere to the post 60’s revolution’s interpretation of what is right?

Find out more about frum boycotts on 4torah.com

39 comments for “Is it ethical for Orthodox Jews to support companies which are anti-Torah?”