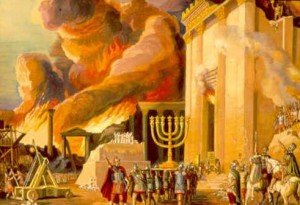 During the Babylonian captivity (586-515 BCE), Jewish exiles commemorated the destruction of the Holy Temple and the First Commonwealth with a series of four fasts.  We cannot be certain what particular aspect of Judah’s downfall was commemorated by each such fast.  We are also uncertain of their precise calendrical dates; we know only in which months the fasts were held.

Is this comment negative or positive?  On the one hand, Zechariah refers to the days in question as fasts; on the other, the prophet predicts their future transformation into festivity.  The accepted halakhic interpretation is that of Rav Papa.  “When there is peace, these days will be for joy and gladness.  When there is persecution, these days remain as fasts.  When there is neither peace nor persecution, the fasts become voluntary (Rosh Hashanah 18b).”

Peace and persecution are, however, amorphous terms. The commentators struggled to find their precise legal definition.  The consensus of the overwhelming majority of Rishonim is that commemorative fasts were not observed during the Second Temple era (Rashi, Tosfot, Ramban, Tur, Meiri, Tashbetz).  So long as the Temple stood — and despite several rounds of political turmoil and associated carnage — technically the era was a “peaceful” one.  Maimonides believed that the Second Temple era was of intermediate status — neither peace nor persecution.  In his opinion, Tisha b’Av remained an obligatory fast, while the other fasts became optional (Mishnah Commentary Rosh Hashanah 1:3).

The opinion of the Rishonim is ultimately of limited value in answering our historical question.  Why is that?  It is because the classical commentators relied on the exegetical analysis of a fourth century Amora to determine what had happened nine hundred years earlier.  In contrast, modern scholars and historians look for more concrete documentary evidence of commemorative observances by Second Temple-era personalities.  The evidence is scant and seemingly inconclusive; major figures in 20th century Judaic studies are to be found on both sides of this debate.

Here is a brief review of the evidence:

(a) Josephus describes the capture of Jerusalem by Pompey in 63 BCE as having occurred “in the third month on the day of the fast (Antiquities 14:4:66).”  Some interpret Josephus to mean the fast of 17 Tamuz.  The obvious problem is that Tamuz is the fourth, not the third, month.  Since no traditional fast is scheduled for Sivan (the third month), there is much room for speculation.

(b) Rabbi Elazar ben Zaddok reported that on one occasion his family did not complete the fast of Tisha b’Av because it was their day to bring the Wood Offering and, thus, a private half-holiday (Ta’anit 12a).  Some point to the simultaneous observance of both Tisha b’Av and the Wood Offering as evidence that commemorative fasts were observed (at the very least by the Kohanim) during the late Second Temple era.  Yet, in fact, this proves nothing, because the annual date of the discontinued Wood Offering was observed by prestigious families as a private holiday for several generations after the devastation of 70 CE.  Rabbi Elazar ben Zaddok was a youngster when the Temple was destroyed and lived to beyond the Yavneh period.  The story in question could easily have happened decades later.

(c) The Mishnah records how messengers were sent six times each year to inform distant Jewish communities of the precise date of the New Month (Rosh Hashanah 1:3).  One such occasion was Rosh Chodesh Av so as to ensure proper observance of the fast of Tisha b’Av.  The implication of one version of the text is that this occurred even when the Temple stood, although other manuscripts, and the original printed edition, are to the contrary.

A careful examination of the post-Second Temple era reveals conclusively that commemorative fasts were unknown, not only in the Second Temple era, but even in the subsequent half century and until the waning years of Rabbi Akiva’s life.  In the first Tannaitic generation immediately after the destruction, Rabban Yochanan ben Zakkai enacted many pieces of rabbinic legislation to remember the Temple, none of which called for fasting or a specific mourning period on the calendar.  In the second Tannaitic generation, Rabbi Joshua contended with those extreme ascetics who wanted permanently to abstain from meat and wine in the absence of the performance of the Temple sacrifices and wine libations.  Rabbi Joshua instead embraced the more moderate approach of leaving a small patch of wall unfinished and withholding a small item from a bride’s adornment; these acts were to be taken as symbols of mourning our national loss (Tosefta Sotah 15:11).  It is to be noticed that, in this debate, neither side suggested fasting.

Had these fasts been widely observed for centuries, it would have been impossible for anyone to contradict the dates supplied by Rabbi Akiva’s exegesis.  Instead, we observe that Rabbi Shimon bar Yochai, Akiva’s leading disciple, pompously rejected his teacher’s interpretation and claimed “the fast of the tenth” should be 5 Tevet, the date on which Babylonian Jewry learned of the First Temple’s demise (Ezekiel 33:21).  [Rabbi Akiva’s interpretation is also rejected by the Karaites, who suggest four alternate dates, with strong Scriptural support for their opinion.]

The laws of Tisha b’Av are debated in Tannaitic literature almost exclusively by sages of the fourth generation, who functioned in the Galilee after the failure of the Bar Kokhba revolt and the death of Rabbi Akiva.  Lamentations Rabbah, a homiletic Midrash, does not cite any sage from before the fourth generation.  The earlier rabbis of the Yavneh period (70-132 CE) are recalled in the embellished narrative as though they were heroes of Biblical antiquity.

These are all clear indicators that fasting and the chanting of Eicha are novelties of the mid second century CE.  When the political winds shifted in the fifth Tannaitic generation, Rabbi Judah Ha-Nasi made a failed attempt to abolish (or at least to downplay) the commemorative fasts (Megillah 5b).  This could have been contemplated only if the rituals themselves were of recent vintage and had yet to develop an emotional hold on the Jewish people.

We can question why Rabbi Akiva selected 17 Tamuz as a fast day.  The Mishnah lists five tragic events in Jewish history that purportedly happened on that date:   The first set of tablets were shattered; the daily sacrifice (Korban Tamid) ceased to be brought; Jerusalem’s walls were breached by the enemy; Apostomus burned a Torah scroll; and an idol was erected in the Temple (Mishnah Ta’anit 4:6).

The broken tablets can be discounted as a motivating factor behind Rabbi Akiva’s decision.  There was no oral tradition on this matter.  Complex analyses of multiple Scriptural passages are prerequisite for trying to pin down the precise date on which Moses smashed the tablets.  This chronological reconstruction was developed to connect Shavuot with the Revelation at Sinai; its conclusions post-date Rabbi Akiva by a generation (Shabbat 86b).

According to the Bible, the walls of Jerusalem were breached by the invading Babylonians on 9 Tamuz (Jeremiah 52:6-7).  How could the Mishnah contradict Scripture?  The Jerusalem Talmud offers the radical suggestion that the Bible is wrong, because, as a result of chaos and the fog of war, the timeline became muddled.  Talmud Bavli simply distinguishes between the First Temple, when the city’s defenses were punctured on 9 Tamuz, and the Second Temple when essentially the same event occurred on 17 Tamuz.  The problem with this answer is that it contradicts Josephus’detailed – and eyewitness — account of Jerusalem’s fall.  Josephus writes that the first wall was captured on 7 Iyyar, followed by the capture of another wall on 16 Iyyar (War of the Jews 5:7:302, 5:8:347).

It is unclear who Apostomus was or when he lived.  Some point to the account in Josephus, where a Roman soldier was beheaded for having desecrated a Torah scroll (Antiquities 20:5:115).  That incident, however, took place shortly after Passover and not on 17 Tamuz.  Other scholars look to the Hellenistic era, when Torah scrolls were burned under the anti-Judaic regime of Antiochus Epiphanes.  But, that sacrilege happened on 15 Kislev, not 17 Tamuz (I Maccabees 1:54-56).

The Talmud (Ta’anit 28b) directly connects the placement of an idol in the Temple with the cessation of the Korban Tamid by referencing the verse, “And from the time that the continual burnt-offering shall be taken away, and the detestable thing that causes appalment set up (Daniel 12:11).”  Yet the Talmud is uncertain who set up the “abomination of desolation,” suggesting that it might have been either Apostomus during the Second Temple era, or King Manasseh during the time of the First Temple.

Of the five tragedies under discussion, only the cessation of the daily sacrifice (Korban Tamid) can be confirmed as having taken place on 17 Tamuz.  Josephus commented that “the people were grievously troubled by it (Wars of the Jews 6:2:94).”

It now becomes clear why Rabbi Akiva turned 17 Tamuz into a day of fasting and mourning.  More than any other sage, Rabbi Akiva expounded the Tamid section found in this week’s Torah reading (Numbers 28:1-8) for legal and homiletic points.  Commenting on the verse, “It is a continual burnt-offering, which was offered on Mount Sinai (28:6),” he emphasized that after its first observance on the morrow of the Revelation it never ceased to be brought (Hagigah 6b).  The Korban Tamid represents an unbreakable bond between God and Israel that is reinforced daily.  Loss of that symbol could lead some to believe that that relationship had been discontinued and that Israel had been superseded, in terms of God’s favor, by another, different people.  Accordingly, the loss of the daily sacrifice can be considered to be almost on a par with the burning down of Israel’s sanctuary to God, the Temple.

The overall lesson for us moderns is that our service of God must be perpetual.  There are no days off in the religious life of the observant Jew.  If we want the Almighty’s constant love and attention, we must be willing to, and must in fact, reciprocate.

The absence of the Temple makes it impossible for Jews to offer the Korban Tamid and other sacrifices and libations.  During these tragic weeks, it is that inability to fulfill our daily obligations for which we grieve.

← Olmert Acquitted on Corruption Charges; Are West Bank Settlements Legal?
Is it ethical for Orthodox Jews to support companies which are anti-Torah? →

5 comments for “Dvar Torah Pinchas: Fasting for the Korban Tamid”