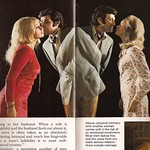 I am three years into my separation from my husband, and still no get. His ruv told him that he should not give me a get until we resolve the legal matters in our civil divorce. The court system is clogged and we can’t even get a court date. ?So I fully expect to be a chained woman for another year. I asked my Rabbi if he could help, but he explained to me that some beis dins suggest doing the civil divorce first so that the get is the last part of the process. ?This ensures that the man has full power over this horrible process.

BTW, ?my soon to be ex is on Frumster, and I know that he’s dating single frum women in the community.?My ruv does not allow me to date, even casually since there is nothing worse than eyshes–ish, and I should not do anything that might look like it could lead to mixed dancing. My son would be kicked out of his yeshiva day school if anyone saw me on a date.

So your ?soon to be ex- (“2bx”) husband figured out how to get permission to make you an agunah. All he has to do is nothing, and allow the sluggish court system to delay your proceedings and he does not have to give you a get. You can’t date, but he can. He has no reason to opt for mediation, since time is on his side — until he decides if he wants to get married. Isn’t being a frum woman great?

Why does your husband, a married frum man, think it’s ok to date single women in the frum community? BTW, he’s violating the terms of service at Frumster.

I was upset to learn that my soon 2bx husband is dating frum singles. So I asked my ruv is that was OK. It’s?embarrassing?for me. He said there’s nothing I can do about it. He can date, I can’t.

I see from your name that you are changing your identity already. ?No more Chassi? Anyway it’s OK for your 2bx husband to?embarrass?you. Rabbis now a days have decided that halacha says nothing about being mentchlich. We are only focused on technicalities and kashrut?certifications. Except of course for the kiruv guys, who only care about preventing profanity on websites.

But I wonder why your community ruv thinks it is OK for the other single women in your community to date you married husband. Whereas your feelings are clearly?irrelevant, what about the feelings of other women in the community? Should they be going to frumster to meet married men?

The rabbis don’t care about the other women’s feelings in our community. They don’t mind if the singles in the community date married/separated men. And they don’t mind if I don’t get a get for another year or two.

I’m sorry to learn that the rabbis in your community don’t understand how to use their power to help the victims.

Thanks for listening. Knowing that some people in the frum community care about these issues and are?appalled?at the mistreatment I’m getting is giving some hope to hang on and see this though.

Find married frum men who will gladly date your single daughters without telling them they are still married on 4Torah.com