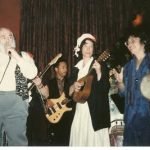 Every time I hear about someone doing a Carlebach Shabbat (I think I may need a post to describe such things) or opening a Carlebach imitation shul I roll my eyes. What they usually mean to say is that a bunch of semi-open minded former hippie Jews convinced the board to sing more than lecha dodi on Friday night and advertise it as a Carlebach Minyan. For all the love of Reb Shlomo that exists, the singing is usually not up to par. So with a weary heart I entered the basement of a fancy home on President street in Crown Heights last Friday night to daven and see if the rumors that Chevra Ahavas Yisroel aka CAY was really that great. I picked a seat towards the back so I could view the going on’s and waited for the singing.

I picked a wall seat so I could leave if it sucked, I also picked an end seat and acquired an arm rest for myself so I could be comfy. I couldn’t find any interesting books to read while I waited for mincha to finish and the mechitza was a little too tznius for me. I would have preferred some wooden slats to at least provide me with an idea of what chabad girl treasures lay beyond the white screen, but this was Crown Heights and even though tznius is a big issue that chabad girls struggle with – their mechitzas are still gaze-proof.

The singing blew my mind, CAY was that good. Sitting in front behind the Rabbi in a small brimmed hat leading the chorus were all the good singers and they dominated all us folks who couldn’t sing except for shower melodies. I couldn’t tell if the women were singing, but it didn’t matter, this crowd sang and sang. It was almost as authentic as the Carlebach shul I had grown up in as a kid. The original on 79th and West End ave on the upper west side.

Even though it was mostly young chabad dudes, there were some gray haired folks and about 10 other snags like myself. Someone recognized me, but I told him I was there to observe and I’d rather not be outed. Crown Heights and Williamsburg are the two places where I cannot go without being recognized instantly, I used to like it but in the last few years I like to remain in my own anonymity. I was also warned by my wife that our marriage would be announced and when the time came I pretended like I wasn’t there.

Not only was the singing good, but the tunes were all in sync. There’s nothing worse that getting a nice Carlebach thing going and having the tune messed up. Lecha dodi was leibadicke followed be a joyous circle of dancing men. I’m not sure if the women were dancing or not. Then during maariv they sang “Mi Kamocha” which is one of my favorite Carlebach niggunim and which is seldom sung at Carlebach minyanim who feel that once kabalas shabbos is over there is no more singing to be done.

I actually stayed till the end, when I was a kid we would daven maariv to ourselves, but it was gimmel taamuz and I wanted to see what the Rabbi would say about the Rebbes Yertzeit. He said something about many in the crowd being too young to have known the rebbe personally or to have even been alive when he passed but that his message lived on and something of the sort. It was one of the first venues I’d been in Crown Heights in which no one wore a Yechi yarmulke.

On my way out, I walked up the stairs to get a gander of the ladies, but all I saw was bright lipstick. Apparently CAY gets a lot of folks in CH angry because of the socializing that goes on after davening between the sexes, but I couldn’t see anyone making moves on anyone – I kind of wish it was a scene like OZ but this was not the case.

Overall Chevra Ahavas Yisroel was the most authentic Carlebach shul I’d ever been too and the singing was wonderful, I still think Mission Minyan has the best singing of any shul I’ve encountered. The Jewish Week article on CAY explains it quite well.