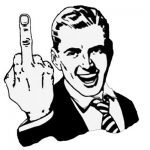 From someone by the name of Mr. Cohen.

Over the past five years, Heshy Fried has attacked and ridiculed Baalei Teshuvah numerous times. He thinks that this is funny, but I am not laughing.

I wouldn’t be laughing either if I had something lodged that far up my ass.

You’re probably right, but 50 foul mouthed Heshy Fried’s are a lot funnier than one sincere BT. Although I’ve noticed that sincere BT’s can get to be pretty funny, because once they get to the point of sincerity they’ve dealt with so much bullshit that they can only laugh about the craziness. Hence the large audience of BT’s who read this site.

Heshy Fried laughs as he speaks nivul peh and ridicules Baalei Teshuvah, but he won’t be laughing in Olam HaBa when Baalei Teshuvah are on top, and he is stuck on the bottom with his filthy mouth – forever!

In all honesty, if I were gay, I’d probably be a top, but since I’m straight I;m not really sure what to make of your comment.

Heshy Fried does not deserve to be happily married; I wish him an unhappy marriage and a nasty divorce 🙂

That’s just fucked up man, I mean if you’re trying to give me mussar it would be better to give me mussar. But now I give to you the curse of the day from a facebook fan: The author of the comment should marry a total jappy Yenta who spends all his money and never shuts up, have too many kids to afford the yeshiva tuition on his meager koillell salary, and simply never have peace and quiet again.

Last but not least, Heshy Fried’s remarks on this web site could easily send him to Gehinom

I have a feeling that you’re negativity and hate is going to give you a heart attack and send you there first, but nivel peh’s a bitch so I could be wrong.