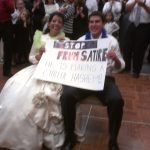 I know a lot of you want to hear all about my married life but to tell the truth, nothing has really changed. The reason for this is that unlike my rants and raves through the years, I fell in love hard and fast. My wife claims to have fallen in love with me in Matthue Roth’s sukkah and I claim to have felt the first inklings of love 2 weeks after we first went out. During our second date I spoke of marriage and on the fourth date I proposed. We knew all along we would get married and the cold feet were only caused by my fear of ending my loner existence which lasted about 2 minutes. We all along and therefore when people ask us excitedly “what’s it like to be married?” our boring response is always “we felt married before we actually got married.”

I know it sucks, but I can’t say things are different. Sure, life is kick ass to be hanging out constantly with your best friend who you love madly and deeply, but I can’t say it’s different or I’m on some high floating around. I think it’s good that I’m not on some high I like to just be and I like to just live. According to most of the frum marriage propaganda I read, many couples felt weird when their sheva brachos ended and normal life kicked in. We felt exactly the opposite, sure the sheva brachos were fun and filled with good peeps and good food, but in all honesty we thought of just not having some of them  because they are so draining. We couldn’t just be.

But then the sheva brachos ended and things changed, life kicked in, work and cooking and being normal and that’s when I started to realize how good it was. We went camping, we went out like normal folks and I started my daily mountain biking schedule again and life rocked. Hey, I’m only 2 weeks in, but we feel like we’ve known each other for years and that may seem a bit weird to some of the newer couples we hung out with last week.

It’s not that getting married made me more mature, it’s just made me realize certain truths and certain things that single life (unless I had as loving a relationship) could never have provided. This is one of the reasons that I’m not really writing about married life, it’s sacred and private and just like most of my private life has stayed sacred (my wife’s epiphany the other day was that 99% of the posts on frum satire aren’t about Heshy Fried, was surprising because the smarter readers have figured that out eons ago) rings true and will continue to ring true.

Anyway, life is normal as it was before. Don’t worry, I still look over the mechitza, go to shul for kiddush and get pissed off when people can’t even get Carlbeach niggunim right. I hope I don’t get too mature.

← I used to hate chabad, but then I needed a mikvah in the middle of nowhere…
Are Ahavas Yisroel and Ahavas Torah compatible? →