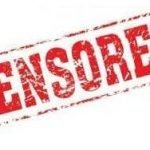 Every once in a while I remove a post, this happens about once a month. Certain posts I know I will remove, it’s like I write them just to test the waters, push the boundaries and retreat just to stir the pot a little more vigorously. Other times it’s through high level complaints from various Rabbis or Lawyers and once in a while it’s due to false information displayed in a post. There are also posts written by people, who while being anonymous, just couldn’t take the comments leveled against them. Sometimes it’s a convert who doesn’t want their beis din discovering them and once in a rare while it’s to do with shadchanim discovering that they aren’t as frum as they stated on their shidduch resumes.

Most of the time these posts fade in to obscurity, a few weeks ago I posted a letter to the editor with my humorous responses about a dude from Seattle who was wondering if his high school experience in a Seattle Jewish high schoolgave him the abilities to hook up with high school girls in the five towns. Sure, the letter didn’t really make sense, but sex sells – especially when you get to disparaging your former sort of frum high school. The letter ripped into his school, the Northwest Yeshiva High School and it talked all about the mixing of the frum and the non-frum students and coeducation and so on. For the record my response was that I find that the most adjusted and open minded Jewish students come from schools with diverse populations. Anyway the letter ripped into all the supposed “failures” of NYHS and the Seattle community for not having enough kosher restaurants (it’s got more than the entire Bay Area and better options) For the record, Seattle is one of the few places in the country I would live voluntarily.

Just before the shabbos after I posted this piece I received a call from a fan in Seattle (the best way to get me to remove something is to ask nicely in a phone call – getting my number and going through that effort means a lot more than an angry email). The fan was upset about the post and told me that people in the comments were using the names of teachers in the school,m including Rabbi Bernie Fox. I removed it right away, the next time I checked my facebook and email I noticed that I had received a barrage of requests from students and faculty to remove said item. Apparently the person who wrote the letter was a former student who’s family is deeply against NYHS because of the issues mentioned in the letter.

There is truly nothing like getting multiple complaints, makes one feel powerful. You can do a lot of good and hurt a lot of folks with merely words. It doesn’t hurt to have tens of thousands of readers either, but I just wanted to say that I’m sorry for the damage I caused to the Northwest Yeshiva High School which sounds like a pretty good place to send your kids, unless you don’t want them mixing with different types of Jews – then I suggest Lakewood or a non-Baltimore style Bais Yaakov.

Threats to hack my site if I didn’t comply with requests: 2

Phone calls from high level Rabbis that you have heard of: 4

Women claiming I ruined their lives: 1

Calls from pissed off Shadchanim: 2

Find out about frum media censorship on 4torah.com