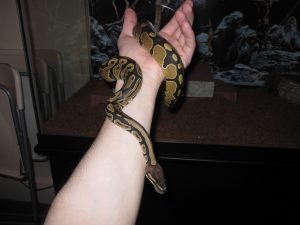 Someone approached me to tell me how nice of a piece I had written about this week’s parsha, and I responded that I hadn’t written anything yet!  But when they told me that they had thoroughly enjoyed my tie in of the snake on a pole and kiddush and running around trying to make money during the week, it was that that I realized that he had mistakenly read last year’s post on Chukas thinking that I had written it now.

It’s a good thing he reminded me, though, for I was about to write about the snake — I really like snakes (the photo above is of my pet snake, Motty Python, although it was my wife who named him).

Anyway, let’s talk about cows instead.  I was never really excited about Chukas the way some other people are, in the sense that there’s often such a hullabaloo made about the oddity of the parah aduma (red cow) when, as we’ve discussed before, perhaps it’s a bit overblown.  Then again, I suppose for the new student of Judaism, there’s something to be said about the seemingly nonsensical basis for this law.  To me, though, it doesn’t really seem any more strange than most of the other strange things we as Jews do.

This point is brought out by the Sifsei Chachamim, who wonders why there is such an emphasis on this law as opposed to others of equal or perhaps even greater peculiarity, such as the purification powers of the mikvah.  It is for this reason that he turns the focus onto the oddity of the ashes used in the purification process, in that they cause the pure preparer of the ashes to become impure while causing those who suffer from impurity of the dead to become pure.  As a child, I remember pondering this as a paradox, only to later realize that the preparer does not assume the same level of impurity as the one needing purification with ashes, which diluted the paradoxical nature of the riddle, making me less inclined to need a resolution.  It just seems to me that Judaism demands (or rather, lets say that Jews do) so many things that appear to be wild and crazy that that the preparer of the ashes becoming defiled comes across as no less strange than so many other things.  Last year, I had a co-resident who was surprised to find out that I could eat meat because he was sure that such a thing would have been be among the things prohibited by Judaism, what with the need for me to leave early on Fridays and having strings dangling from my belt.  I also remember that we went to a restaurant together and he asked me why there needs to be a rabbi on the television while we’re eating — needless to say, we ate here.

But while there are many rules for which there are no explanations available, it is said by some that Moses knew all of the explanations but was instructed not to transmit them.

According to the Ishmaelian school of interpretation, Moshe spoke these words of Deuteronomy of himself; and so what did he mean when he said “to me God commanded” — all of the Torah was first given to Moses and Moses then gave it to the people.  What was Moses trying to say here?

The Talmud (Yerushalmi AZ) quotes R’ Yitzchak as stating that there were certain things meant for Israel and other things meant only for Moses, and particular mention is made of the rule of the red cow, about which R’ Yose said in the name of R’ Chanina that God told Moses that He would explain to him the purpose of this ordinance, but to others it should seem like an arbitrary decree.

Through this explanation, R’ Yose (one of the five primary students of R’ Akiva) perpetuates the notion that God and Moses had not only a unique and unrivaled relationship but one imbued with a momentousness that effectively separated Moses’ acceptance and recognition of the Torah from that which he passed on to Joshua and the rest of Israel.  R’ Akiva referred to the Torah as a “vessel of delight” (Avos 3:18), as opposed to Moses, who was able to experience the Delight himself.

← Can you please get rid of the untznius dating ads on your site?
First Circumcision Herpes Infection Reported Outside NYC: Yad Vashem Anti-Zionist Alleged Vandals Arrested →