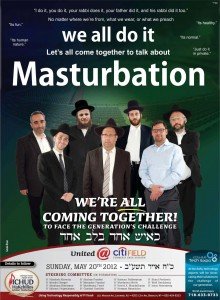 Pornography is not cheating. If couples were to take part in it openly, then it could enhance and improve their relationship more than other things because the very nature of pornography is that it’s an intimate and secretive thing. To think that pornography is an evil twisted thing that only perverts do in their mothers basements is misleading, I am sure it breaks up marriages, but I’m pretty sure that too much of anything can break up a marriage (I heard once of a couples addiction coconut water that broke up a marriage). After reading all that Artscroll/Feldheim frum media bullshit on marriage advice I realized something very important. That frum society has a very twisted view of sexuality in marriage.

It would seem based on my reading that women hate sex, need constant emotional support and if they liked sex there must be something wrong with them. On the other hand, men are animals who need to be pleased all the time and will never show any emotion. Just like the age old addage of women needing to cover up their elbows because men can’t tame their animal desires – it seems that frum marriage guides are reinforcing the fiction that women are all emotion and men are all about sex.

← The worst thing about being married so far…
Can you please get rid of the untznius dating ads on your site? →

42 comments for “Do you think pornography is counted as cheating?”