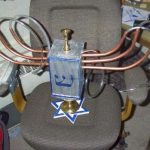 I posted this very serious Shayala for many frum Northern Californian Jews on my facebook wall the other day and got some very good halachic responses that are hard to come by since most robbonom have little experience with pot smoking. It’s not that I smoke much pot, but since many people in my neck of the woods do I figured we could finally get down to smoking pot in a manner that is compliant fully with shulchan aruch and many other commentaries. Obviously, the lack of grow lights and prevalence of bitter cold winters made it hard for pot to be grown in Eastern Europe and therefore the mesorah for pot smoking was lost, but I still feel it an important halachic issue that effects many members of out kehilla.

In all honesty, the real question should not have been wondering whether a Jewish owned bong needs to be dipped in the mikvah prior to usage, but really whether or not one could smoke from a non-Jewish bong. If bishul akum is assur, wouldn’t someone’s keli that was used by a non-Jew to cook be assur without a proper kashuring and/or toivel? This is for another time, since pot may be considered “lo ruey lemelech” it may not be a problem, but let’s keep things straight. Do bongs, commonly used to smoke herbs and tobacco need to be dipped in the mikvah?

Find out about kashering your bong on 4torah.com

9 comments for “Do bongs need to be toiveled?”