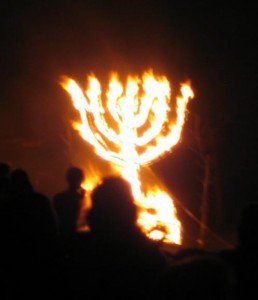 “…beha’aloscha es haneiros el mul p’nei haMenorah…” — “when you light the lamps towards the face of the Menorah…” (Numbers 8:2)

What does the verse mean when it says to light the lamps towards the Menorah?  Rashi explains that the peripheral wicks were pointed towards the center wick while Maimonides claims that the actual oil cups themselves were tilted towards the middle stem — and they are joined by the Or HaChaim, Kli Yakar and Ba’al HaTurim in explaining that the point of this configuration of the flames of the Menorah was to show that the light was for the metaphorical purpose of signifying God’s presence — to provide an elegance and a seriousness, not unlike the formality of a candlelight dinner with a special someone — rather than to provide light for God in his house.  Had God needed the light, it would have been much more beneficial to spread the light as much as possible, not focus it into the center.  Remember the Village Crown?  Had the candles on the table been for light, they could have just turned the lights on.  It was like there was a perpetual blackout — when I was dating my wife, there was this old guy at the next table who nearly lit his menu on fire while trying to read it by the fire that no doubt was meant to signify the presence of God.

Despite seeming obvious — of course God doesn’t need the light — this is not the view of the more commonly promulgated Akivan perspective.  For R’ Akiva, the Mishkan and its vessels and its service were not for us but for God.  He needed the Jews to accept the Torah and He needed the temple worship.  While R’ Ishmael, whose methods of interpretation deeply influenced the Sifri from which Rashi quotes, firmly maintained the light, as well as everything else, was for us — whether physically, psychologically or in some other capacity.

Two verses later, though, Rashi is already looking at things in a much more…er…Akivan light.

“v’zeh ma’aseh haMenorah miksha zahav…miksha he kamar’eh asher her’ah Hashem es Moshe kein asah es haMenorah” — “This was how the Menorah was made: beaten from gold…it was beaten out according to the vision that God showed Moses – so he made the Menorah.” (Numbers 8:4)

While the recognition of figures of speech plays a large role in the interpretative mannerisms of R’ Ishmael, R’ Akiva prefers to learn from the redundancy of the verse that God showed Moses the heavenly Menorah of the heavenly Mishkan multiple times and from the ambiguity of the subject at the end of the verse that it was God and not Betzalel was the one who ultimately had to make the Menorah for it was too hard (a play on the words miksha [hammered] and kasheh [difficult]) for Moses to figure out even after the audiovisual tutorial.

Th Ishmaelian school of thought takes a much more relaxed approach to this verse, explaining that Moses simply followed God’s instructions and that the notion of there having been images and visions is reading way too far into the text — it would be akin to one saying to his friend, “Ah…I see what you’re saying.”

This focused dispute is very much in line with the general pattern of the Akivan/Ishmaelian divide, with the latter understanding things without the need for inordinate fanfare and the former piling the mystifying upon the miraculous.

← Wiill Jewish Republicans Make it to Congress?
Why frum Jews should vote for Obama →