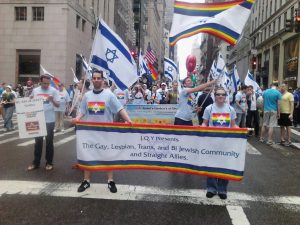 I have no idea how it happened, but it seems that the frum community is obsessed with frum gays or maybe the concept of frum gays because how can one really “act” on being gay and be frum right? Now of course, that sentence alone is likely to get me thrown into the ever increasing dungeon of supposed “gay haters” and frum homophobes, but it seems that anyone who in believes in the Torah becomes a gay hater by default. The Torah says it’s an abomination, it’s not like tefillin where we can come up with different interpretations – we cannot ignore it – yet when asked about what else those who are orthodox Jews supposed to do?

Therefore we have the Catch 22 of the Jewish Gay Community. Many folks get a little emotional and illogical about it, they enter their own feelings about gay sex, just because you’re not into someone else’s sexual preferences doesn’t make them disgusting (please don’t make some childish comment about non-consensual sex pedophiles). The problem with this particular thing is the sex aspect, that’s why people get all up in arms. White collar fraud is not such a big deal to most frum folks because it doesn’t involve something they feel as disgusting. Sure, if Rubashkin had treated immigrants poorly and lied on his bank loans while having sex with one of the cholov yisroel cows – there probably wouldn’t have been a Lipa music video tribute made for him. But who cares about a little money laundering and fraud, as long as the guy builds a nice shul or sends some kids to yeshiva. Frum gays on the other hand offer nothing to the community and the sex part drives people insane. It’s probably worse to steal from someone than have gay sex, but gay sex sounds worse and it repulses straight people.

If you support frum gays you’re an apikorus, if you don’t support them you’re branded a hater on terms with a racist. Sp what’s a Torah observant Jew to do? Then there are those that feel they are “shoving” it in our faces? I’m sure those same people also think those who were sexually abused by their rebbes are “shoving” it our faces. Is getting out and having pride shoving anything in our faces? Well, it kind of is, I mean they are basically telling us that they can break an important prohibition in the Torah but still demand acceptance by the community…could they improve their lot by being more subtle about it. Maybe the frum community isn’t ready for the type of gay pride that went on at the Israeli Day Parade yesterday? Maybe they could just happen to be gay, instead of flaunting their sins? Of course now I may be branded a hater, I myself happen to like gay pride parades, but when it’s specific in its purpose and I think that marching in the Israeli Day Parade probably hurt them more than it helped them. It reinforces the idea that things are being shoved in our faces and it definitely leaves a bad taste in peoples mouths.

You see, it’s a catch 22, you can’t win in this debate. I support the frum gay community, but am willing to admit their long list of faults and that full support for those who blatantly go against the Torah will never be accepted by those who keep the Torah. Yeh, yeh – what about those who don’t act on it? If I was gay, I would sure as hell be acting on it…just saying.

Find out more about frum gays at 4torah.com

66 comments for “The Catch 22 of Frum Jewish Gays”