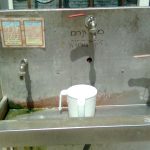 I walked into the shul in San Jose the other day and felt inclined to wash off all the ruach ra’ah and tumah of the internet from my hands before davening. Suddenly I started wondering about how you can calculate a shuls level of frumness just by the fact that they had sinks devoted to hand washing. You may notice that some shuls have the washing sinks in a separate room right outside the bathroom, but the highest level of frumness for a shul is to have a large metal trough with metal washing cups chained to the faucets – there cannot be soap present because soap is inherently a modern orthodox zach.

Seforim: Obviously, the easiest way is by the seforim. One or two artscroll gemara’s lying around could be fine, but if your shul has a whole set of artscroll shas it can be very telling of the lomdus level of the shuls members. Take a look at the other english seforim (being from a modernishe back round I can use that term) BT shuls will undoubtedly have a whole bunch of Keleman, Tatz and some books that utilize science to prove God and very frum shuls that have English seforim will probably limit them to the mussar seforim like Mesilas Yeshurim, Chovos Halevovos and Derech Hashem. These shuls will also have a bunch of those Artscroll “history” revised shtetl fantasy gadol biographies. Modern Orthodox shuls will usually have some apikorsus in their shul libraries and the mere fact that it’s called a library and not a beis medrish is very telling.

Where shuls place their seforim is also telling, the frummer the shul, the more likely they are to have book shelves in the shul itself, so you don’t have to leave shul to find a sefer. The frummer the shul, the more worn the seforim are and the more haphazard they are stored, frum shuls will also tend to have tables with seforim scattered about and don’t expect to find any artscroll chumashim either.

How they remind you to say ya’ale vayavo: In really frum shuls, someone gives a clop and yells it out and then everyone in the shul proceeds to say it out loud whenever they get to it in order to remind their neighbors to say it. In really modern shuls they have it in some sign in an obscure corner of the shul so as not to mess with decorum. In frum shuls with a lot of hockers, many people give a clop to the bimah because everyone wants a part of the action.

How they sing Lecha Dodi: Really frum shuls never really sing, the chazzan sings and everyone kind of hums along or waits for it to be done with. Really frum shuls will have the chazzan sing a verse of lecha dodi and then he’ll stop and everyone else will say it to themselves. I never understood the practice, even though some have explained that many frummies are scared to sing davening because you may miss words, but I don’t buy it.

Havdallah: If they say havdallah in shul, they aren’t that frum. In general, the frummer the shul the less likely they are to do things which may not be cool, like saying havdallah when you know you have to go home and say it anyway. The more modern or un-frum the shul is, the longer, more drawn out their havdallah will be.

Kiddush Food: As a general rule, a really frum shul shouldn’t have anything healthy at kiddush. Carrot sticks or anything with whole grain in it automatically reduce the shuls hashkafa to modern. If they have a kiddush that women aren’t invited to, then it’s safe to say that you can hold by their kitchen without asking. In frum shuls, no one waits for the rabbi to make kiddush, everyone says their own. You can always tell a shul is really modern orthodox, when someone passes you a shot glass of grape juice to drink from, everyone knows you need a mezonos to really make the kiddush count.

Women’s entrance: If women are going to come to shul at all, God forbid we actually see them and if there’s a party or big kiddush, the women stand all the way on the other side. Some members even get mad when girls over the age of 3 go into the men’s section, they call the women’s section the “ezras nashim”.

Mechitzah: The mechitza is designed in a way that never even allows a peak, there’s no opening up the mechitza to hear the rabbi speak and it wouldn’t matter because it’s designed to keep the women out and the men from being oiver any assur thoughts.

After shul on shabbos: Everyone lines up to wish the rabbi good shabbos, if this doesn’t happen in your shul it’s not really frum. Then everyone rushes home, there’s no socializing in very frum shuls, the wives and kinderlach need to hear kiddush and go over their parshah sheets to prove that their 20k in tuition costs are worth every penny.

Tables and Shtenders: Very frum shuls usually contain both tables and/or shtenders. Shuls with tables usually have seats on both sides, making those sitting with their backs to the front, quite awkward during speeches and other front facing shul activities. Other very frum shuls have either shtenders on the back of the benches, or a random assortment of standing and sitting shtenders. In very frum shuls you will also notice that every little kid has his very own shtender that he made in camp.

← Is there really a sheep’s milk shortage or is Trader Joe’s not willing to sell Israeli Feta?
First Reform & Conservative Rabbis Employed by State of Israel →