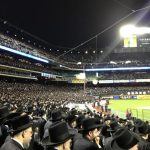 I’ve asked folks to send me their reactions to the Internet Asifa held today in Citi Field. If you can send me what you saw, heard, experienced or any pictures you may have from the event I would greatly appreciate it, if you wish your name will be kept anonymous.

I honestly went to the Asifa with no expectations, well I knew it would be a sea of black and white and that it would be a great opportunity to hear some mussar from some of the greatest gedolim of our generation. I chose to wear my shabbos best, because it almost seemed as if this was the pre-game no pun intended, of the upcoming siyum hashas in Aigust at Giants stadium. I was wondering what could be the appropriate way to open such a large gathering of Yidden in one place and when they started reciting tehillim I instantly fell in line with everyone else shuckeling. It kind of felt like one big wave to be honest, thousands of Yidden from all walks of life swaying while they prayed to Hakadosh Baruch Hu for help and guidance against the yetzer harah we now know as the Internet.

Rabbi Green of Monsey was the one given the kavod of saying the tehillim, he was one of those responsible for trying to save Rabbi Israel Weingarten from evildoers that got him thrown in prison. Apparently someone didn’t like him much and framed him by claiming he molested and raped someone, I truly hope the tehillim said by everyone in the stadium would be zechus to get him out of federal prison. Then of course, someone opened up with a speech about how child molestation is being used as an excuse not to have this great asifa. Apparently there was some sort of protest outside the stadium by frei Yidden who claim that a few minor cases of unproved sex abuse is more important than saving an entire dor from mass annihilation.

As I looked around the stadium I couldn’t help but feel awed by how many Jews from all walks of life showed up. I saw Chassidim in potchke bebers, streimlach and even a few regular up hats. I saw yeshivishe, heimishe, litvishe, ungarish and even a few yekishe folks mixed in. It was truly amazing to see the achdus, everyone was saying hello to each other and everyone was also amazed at the diverse turnout. There were folks wearing hats and folks wearing just yarmulkes. I saw several people who decided to forego jackets and even one chassid with just his vest and tzitzis. I’m telling you that it was one of the most diverse events that truly brought achdus to all of klal yisroel, I think I even saw some chabadnicks there too.

If there was one memorable speech it was from Rabbi Wachsman, he spoke of the true tumah that permeates our homes because of the internet. I had recently heard about public internet kiosks for folks who wish to keep the tumah away from their homes, but this Rabbi spoke such emes I think we were all thinking what he said all along. He compared the internet  to Zionism, which is something too many people accept without noticing the dangers. Just like Zionism sounds like a great idea until you remember that it wants nothing to do with religion, the Internet sounds so great until you realize that once you get onto it, you get addicted and wreaks havoc on children, families and marriages.

I was rather disappointed that there was no consensus among the gedolim. They simply could not agree about an action to take and I almost feel that this was a true waste of time. Sure, we heard a lot of chizuk, but to pull thousands of talmidim out of yeshiva, to be bittul torah on such an extreme scale while preaching to the choir was a great calamity. One Rebbe from benei brak said that one should not enter the home of someone with the internet, kind of like tzaras.

The internet was not banned, it was merely bashed by those who’ve probably never used it, yet it was soothing to hear mussar about something I and almost everyone in the stadium uses every day. It was good chizuk to see all of klal yisroel dressed in their shabbos finery to hear such amazing people, yet I feel kind of lost because it seems that there was no point to the event and dare I say that it may have been a chillul hashem as well.